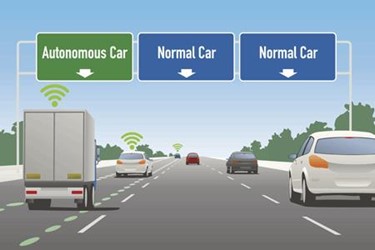 Late last year, Uber’s self-driving truck subsidiary Otto became the ultimate designated driver when it autonomously hauled a truck filled with 45,000 cans of Budweiser beer from Fort Collins, Colo., to Colorado Springs. Over the 120-mile trip, the driver remained in the truck’s sleeper berth as a monitor. The driver only took the wheel when the truck was on the exit/entrance ramp.

Self-driving cars and trucks have been considered a bit of a novelty until recently, something that might enable a driver to read the newspaper or check e-mail during their morning commute once the technology is reliable and safe. But businesses may be the early adopters.

At the Consumer Electronics Show in Las Vegas earlier this year, ClickSoftware VP Paul Whitelam went into detail about how self-driving vehicles will impact businesses and field service organizations.

Logistics and freight services are an early target of self-driving start-ups. In the short-term, this type of technology could conceivably make transportation safer and more efficient, since the trucks could continue to operate even without the driver at the wheel. For that to work in the long-haul industry, however, would require adjustments to Department of Transportation hours of service (Hos) rules that govern how long drivers can remain behind the wheel before a rest break.

Uber and other players in the self-driving freight sweepstakes hope to eliminate drivers altogether, which could radically decrease the cost of shipping. However, expect drivers and unions to push back against that evolution. Safety advocates and lawmakers are also unlikely to view the possibility of a semi-truck laden with thousands of gallons of combustible fuel, for example, to go hurling down the freeway without a driver.

Another company, Peloton Technology, is testing an autonomous truck solution that would “platoon” trucks, allowing them to communicate with each other and drive down the road in a line in such a way to improve aerodynamics, reduce fuel consumption, and cause fewer accidents. The trucks use vehicle-to-vehicle communications, radar, and vehicle control algorithms to operate safely in formation. The trucks could react instantly to acceleration or braking signals from the lead truck.

Other companies that are trying to make a mark in self-driving trucks include Embark, Starsky Robotics, and Drive.ai. In March, Alphabet’s Waymo (formerly Google’s self-driving car project) filed suit against Uber and Otto claiming that the company used trade secrets lifted by Otto CEO Anthony Levandowski (formerly of Google/Waymo) and other former Waymo employees.

For field service, self-driving vehicles integrated with fleet management and GPS solutions could be automatically guided along an optimal route. This can reduce fuel consumption, commute times, and customer wait times, while improving productivity.

In the delivery space, autonomous vehicles would have the same advantage in terms of rote efficiency and safety. Fully autonomous systems, once they are road ready, could even allow parts depot managers to send self-driving cars laden with parts and tools to technicians in the field.

A few of these use cases will only provide a real return on investment if the driver or technician is not in the vehicle at all; that’s probably still a few years off. In the short-term, however, pre-autonomous car technologies like advanced driver assistance systems (ADAS) are making vehicles and roadways safer.

And self-driving technology can help technicians save time on the road by letting them complete work order summaries, review customer histories, order parts, and communicate with other technicians and dispatchers while in their vehicles instead of at the customer site.