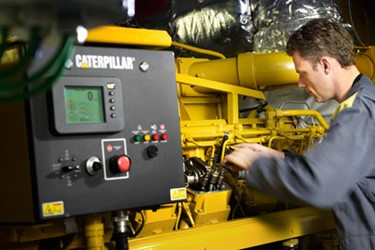 Pon Equipment & Power Power  (Pon Cat) is the official Caterpillar dealer of the Netherlands, Norway, Sweden, and Denmark. Pon Cat was founded in 2003 and provides a full line of construction and power generation equipment for purchase or rental, along with condition monitoring and service solutions. The company currently has approximately 1,000 field service technicians that provide heavy equipment maintenance and repair services to customers across the four countries it serves.

Ben van der Werff, Continuous Improvement Manager for Pon Cat, has been spearheading a modernization effort for Pon Cat’s field operations for the past three years. The effort began with the recognition that not only were Pon Cat’s methods for scheduling, dispatching, work order management, and invoicing different across each of its locations – but none of the methods were efficient.

Pon Cat used an antiquated AS/400 system for its operations across four countries, and each dealer used its own manual methods for dispatching and field operations. Some used paper notebooks, some used Google Sheets and Google Forms, but the common denominator across divisions was that the methods were labor intensive and required a lot of administrative effort. Moreover, each system was disconnected, so Pon Cat had no real visibility, transparency, or control. “The AS/400 system was incredibly cumbersome,” says van der Werff. “We’d have new talent come on board that was astonished by how outdated the system was. It didn’t create a good perception of our company.”

The AS/400 system was disconnected from payroll, which made it difficult to ensure accuracy and reconcile between billable hours of service and technician’s timecards. Field technicians took paper notes on the job, and would later enter that information into the back-end system when they were back in the office or at home. This lack of visibility made it difficult for the dispatchers to get technicians to jobs in the most logical manner, and required a lot of calls back and forth to determine technician location and availability. There wasn’t an effective method for dispatch to react quickly to changes in schedules throughout the day when calls for unscheduled tasks came in.

With the manual processes, invoicing was often delayed. Pon Cat’s lead time from job completion to invoicing with the old system ranged from 20 to 50 days. This delay was holding up payments, and also caused an increased risk of customers debating invoices because they weren’t received in a timely manner.

Pon Cat decided it was time to modernize operations, and sought a system that would not only bring its dealers up to date but also would standardize processes among locations to ensure more consistency, greater visibility, and streamlined customer service.

Technology Is Easy, Change Is Hard

To set its solution criteria, Pon Cat developed what van der Werff calls “day-in-the-life storylines.” These storylines took a detailed look at the work conducted each day by both the dispatchers and field technicians, and used those workflows and tasks to determine exactly what functionality the company needed to find in its new solution. Pon Cat evaluated five vendors, using those storylines to compare the functionality of each, before selecting Trimble PULSE. Trimble PULSE field service software provides capabilities for contract and work order management, intelligent scheduling, field mobility, and performance analytics. “What we found is that there are numerous solutions available with ample functionality, but Trimble PULSE rose to the top because as a CAT dealer we already had a relationship with Trimble [Pon Cat sells Trimble technology from a different division],” says van der Werff.

Pon Cat began a proof of concept (POC) using minimum viable produce methodology, in an effort to as quickly as possible ensure Trimble PULSE was indeed the best fit and learn how to best apply the technology in its business. “Before we made a significant investment in integrations, we first wanted a real-world look at how this technology would fit our processes. Once the POC was considered successful, we started full production of the solution,” says van der Werff. The POC gave Pon Cat an opportunity to develop a scalable implementation process, test integrations with business systems, and begin developing its workforce change management strategy.

“The POC was concluded in March 2016 and as it concluded we were able to say ‘this is indeed what we want.’ Then we needed to select an integration layer, which took us the remainder of the year as we researched what the best methodology and software was to integrate our different tools. This wasn’t a technology delay, it was an internal decision delay. We started our implementation in December 2016, and rollout is ongoing,” explains van der Werff. One of the integrations van der Werff is referring to is that the Trimble PULSE solution is integrated with Kronos timekeeping, which allows Pon Cat to easily reconcile their payroll and billing systems.

The solution is fully deployed in Norway, and Pon Cat is working on continual improvement there as well as rollout to the other countries. As van der Werff reflects on the project thus far, he’s clear that the biggest hurdle isn’t the technology itself but managing the change that comes along with a modernization project like this one. “Change management was our biggest challenge. Technology isn’t the biggest challenge, behavior is – and behavior can’t be changed overnight. There has to be a solid feedback loop, and that loop has to keep going. New technology plus old organization equals a really expensive old organization; you have to change what’s underneath it all,” explains van der Werff.

To manage the change it was introducing, Pon Cat developed a structured training program for techs and service staff which emphasized the ease of use of the solution. “We did two days of training, one for the technicians and one for the dispatchers – then we spent an additional half day focusing on the change management aspect,” says van der Werff. Supervisors were included too to ensure everyone was on the same page about why the solution was being introduced and what its intended use was.

The feedback Pon Cat received from its field technicians was almost unanimously positive. In fact, one technician pointed out that it took him eight months to learn the previous system and “it still didn’t make sense. The new solution I mastered in half a day.” Pon Cat’s dispatchers, however, were more of a mixed bag. “The newer dispatchers gave positive feedback,” says van der Werff. “But the dispatchers who have been around for a long while were less enthusiastic, simply because it is different than how they’ve always done things.” For example, in the old system, time cards were only checked once each period. With the new system, each time card needs to be approved every day - there’s no possibility to not complete it. Some of the Pon Cat employees that have been more resistant look at this as additional work, whereas from a management perspective, it is work that should have been done daily anyway.

Van der Werff stresses the need to continuously monitor and keep the feedback loop open, as change management is ongoing. “You have to tightly monitor for behavior that doesn’t match your vision,” he says. “You need to retrain and revisit. The biggest challenge isn’t the technology, it’s the behavior. A continuous feedback loop will help you to master behavioral change over the long haul, because it can’t be done overnight.” Van der Werff gives the analogy of shopping for a watch: “I was looking for a watch, and the jeweler showed me all kinds of watches. Then he comes up with a water-resistant watch, and he said, ‘Well, the nice thing about this watch is you can actually swim with this watch.’ I was like, ‘Well, I’d better buy this watch, because I could not swim before.’ The point is that giving employees a new system won’t in and of itself result in change. Change requires education.”

Despite the fact that Pon Cat’s rollout isn’t complete; the company has already experienced some significant benefits from implementing the Trimble PULSE and Kronos solution. With the system in place, there is now company-wide visibility into field operations. This visibility helps dispatchers to schedule more effectively. Previously they were using three systems for scheduling; now they are using just this one. The insight dispatchers now have enables them to not only optimize the use of resources, but also ensure customer commitments are being met.

With the mobile app, field technicians are able to view, update, and capture job information in the field and all of this data is instantly updated in the back office. This means no more administrative work for technicians leading to improved productivity, and far better business insight due to the amount and accuracy of data being captured in the field and shared in real-time. Field technician productivity has increased five percent.

Whereas invoices were sent anywhere from 20 to 50 days after service under the old system, now more than 80 percent of tasks are reported/closed on the same day they’re executed – which means invoices are sent sooner and Pon Cat’s service-to-cash cycle is improved.

With timekeeping and payroll tied together in the same system, Pon Cat has been able to reduce non-billable hours paid to employees from six percent to zero. “Before, when hours were lost, we wouldn’t even know. But now, we know it, and we know in real-time. Our level of insight and control is so significantly better than before,” says van der Werff. “The data the solution provides overall enables our company to have far more detailed and informed discussions about our business than we were able to previously.”

So what’s next for Pon Cat? First, the company is focused on completing deployment of the Trimble PULSE solution throughout the Netherlands, Sweden, and Denmark. Van der Werff also says that the company has plans to use automated scheduling, incorporate customer self-serve scheduling, and to research remote assistance capabilities. It’s clear that moving from the outdated AS/400 system to a modern field automation solution was just step one of Pon Cat’s business transformation journey.