When it comes to fleet management solutions, operators have a wide variety of technology options to choose from. Even companies that have an existing solution should periodically investigate replacement systems or upgrades because of the improvements they can enable. In 2014, Shamrock Foods replaced a combined proof-of-delivery and fleet management system with two new best-of-breed solutions that have helped the company improve efficiency and provide more reliable technology to its drivers. 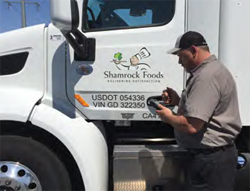 Shamrock is a national manufacturer and distributor of food products. The company’s food service division distributes fresh and frozen foods, specialty items, and gourmet foods to food service companies. Another division distributes dairy products nationwide. The company previously used a fleet solution that relied on black box, fixed-modem hardware and on-board computers in the trucks. Both its fleet management and proof-of-delivery systems were supplied by the same vendor. “It was unreliable and we had a lot of hardware issues,” says Johnny Mullins, transportation manager at Shamrock Foods. “Even after an upgrade, the connectivity issues never really went away, and it was difficult to sync our handheld devices with the vehicle hardware.”

The Decision To Use Handheld-Based GPS
Shamrock evaluated four fleet management providers and ultimately selected XRS after the company acquired Turnpike Global Technologies. “We had used Turnpike in our dairy business for several years and had good luck with it,” Mullins says. “XRS had a solution that was ready to go, and we felt that it gave us an advantage because we were going to be the first company running the new version of that solution. The software did what they said it would once we tested it, and we were able to have the same solution running in both divisions.”

The company also deployed a new proof-of-delivery solution from Systems Application Engineering (SAE), in conjunction with new hardware and a mobile fleet optimization system from XRS. The new system would leverage the XRS Mobile Application Programming Interface (API) to work with the SAE system, and would rely on the handheld computers rather than invehicle hardware to provide GPS location data. Shamrock Foods deployed the Motorola 9570 rugged mobile handheld computer to run both fleet solutions.

Shamrock asked XRS to build a custom payroll report during the implementation because that functionality wasn’t yet available in the system. The XRS Mobile API allows seamless switching between the XRS electronic driver logs and SAE’s Driver Pro System. “That gives us a single point of sign-in,” Mullins says. “The drivers have to do the XRS pretrip inspections before they can get into SAE.”

“With the old system, we were happy to run at 85 percent of the fleet. Now we’re running at 98 percent.”

Shamrock Foods deployed the system over a period of 90 days in late 2014 to its branches in California, Arizona, New Mexico, and Colorado. According to Mullins, the only challenge they experienced was the fact that Windows Mobile occasionally has wireless connectivity issues. (The SAE software is built for Windows, while XRS is optimized for Android.)

Training was minimal because the drivers had already used both a proof-of-delivery and Department of Transportation solution. “The way we rolled it out at the branches was basically at start time,” Mullins says. “We put trainers in the yard, and when the drivers came in, we got them signed on, showed them how it worked, gave them a packet, and off they went. It took maybe 10 minutes. At the end of the day, we followed up with them to see if they had any challenges.”

New Solution Provides More Accurate Data
At the beginning of a shift, the driver logs in to XRS on the mobile computer, verifies driver log edits, and completes the pretrip inspection before switching over to SAE for delivery operations. The XRS solution monitors the drivers’ time and reminds them to take their Department of Transportation-mandated 30-minute break. The drivers complete their posttrip inspections via the XRS solution at the end of the shift. “XRS does everything in the background as far as tracking,” Mullins says. “That was one of the things that appealed to us.”

If the XRS solution needs to issue an alert, the fleet solution preempts the SAE solution to make sure that the driver acknowledges the alert. XRS is also more accurate than the previous solution. “The old system was not very good at tracking when the truck was rolling,” Mullins says. “We enforce a 30-minute lunch break. The old solution couldn’t tell the truck was moving if it went less than 500 feet, so some of the drivers were rolling down the alley to make their next stop when they were supposed to be on break. The XRS solution knows as soon as they move that truck.”

The XRS fleet management solution generates hours of service, and International Fuel Tax Agreement (IFTA) compliance reports, while Shamrock Foods runs payroll using the data from the fleet system. “It gives us their [drivers’] total hours for each shift, and what route they followed,” Mullins says. “We also look at all the regular reports on idle time and speeding. The XRS solution has a dashboard that gives you miles per gallon, rapid deceleration, and other data, and we’re just starting to get into using that information.”

In addition to providing more accurate information on hours-of-service compliance, the XRS solution is more reliable than the previous system. “With the old system, we were happy to run at 85 percent of the fleet,” Mullins says. “Now we’re running at 98 percent. Any failures we’ve had have been because of the mobile hardware, not the XRS system.”

Eventually, Shamrock Foods plans to leverage the driver data as part of its driver rewards program. “You can create a driver score and weight each section of their performance,” Mullins says. Shamrock Foods also has better records related to pre- and posttrip inspections. “We can see where every driver is every day,” Mullins says. “We can check to see that each driver completed the driver vehicle inspection report (DVIR). Every division used to have a full-time clerk that sorted those inspection sheets, and now all of that is electronic.”