As the company’s name implies, General Pavement Management (GPM) knows a lot about pavement construction and maintenance. When it came to developing and deploying mobile solutions, however, GPM’s IT staff was quick to recognize when it needed some outside assistance. So when GPM began planning to roll out a new mobile solution, they turned to MDM software to help manage the deployment and secure the new tablet computers. 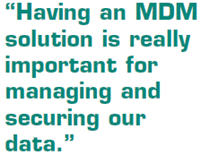 According to Lance Tully, business systems manager for GPM, the company decided to deploy tablet devices to its employees in the field to help improve communication, as well as provide a way to track job progress and costs in real-time. “We wanted to develop a tablet-based application that would allow our employees to send job data back to the office instead of having to fill out paper forms,” Tully says. “We didn’t have any visibility into actual daily job costs. It would be a week to 30 days before we had any idea what our margin was on a project.”

MDM Can Be The Foundation For Mobility
GPM began looking for an MDM solution even before the company had selected its mobile hardware. Tully wanted to be able to push out applications and corporate email to the devices, as well as secure the data on the tablets. In addition, Tully says an MDM solution would allow the company to load applications and provision the devices simultaneously, rather than having staff manually set up each device individually.

The company evaluated several MDM vendors and selected the AirWatch MDM software. “Since this was our first mobile deployment, we wanted somebody that would help support us,” Tully says. “We fired off questions to the vendors, and AirWatch came back with very good responses about the kind of help they could provide. They really helped me learn the functionalities of the MDM platform and what I could do with it.”

For the mobile hardware, GPM tested both 7-inch and 10-inch Android-based devices, as well as Apple’s iPad. The Apple device won out because of its ease of use and platform stability. “Ease of use was incredibly important, because some of the guys in the field had never used these devices before,” Tully says. “Battery life was also important. The Android devices we tested were giving us only four or five hours of battery life after they’d been in use for a month or so, and that was not sufficient.”

The mobile application GPM planned to develop to track job costs also required more screen size, which is why Tully says the company chose tablets rather than smartphones. To ensure the iPads would survive life on a construction site, GPM purchased rugged cases from Speck. “We estimated we would probably replace three tablets per year, but that hasn’t been the case,” Tully says. “They’ve held up fairly well.”

The Importance Of Keeping Workers Connected
Although the job tracking application is still being developed, GPM has moved forward with its mobile deployment, issuing iPads to staff in order to improve communication. The company initially tested the solution with ten employees. “We sent them out into the field with the initial location and email apps for several weeks,” Tully says. “Then we brought them back in and went over the data. We evaluated data usage, what apps were being used, battery life, and how many were damaged. We didn’t have any broken devices, and the data usage was acceptable, so we moved forward.”

GPM has deployed 27 tablets in all to its construction crews. All regular employees are issued iPads, and they are trained in groups of three or four at a time.

Members of GPM’s construction and maintenance division crews use the tablets to access their email in the field, locate coworkers, and make notations on location maps. In addition to email access, the iPads include the Find My Friends app, which allows crew members to locate their coworkers; Google Drive (a cloud-based file sharing solution); You Doodle, which allows employees to draw on PDF documents; and Adobe Reader. Employees can see where other crewmembers are, which helps them arrange pickups and drop-offs of materials or supplies. Managers can send out mass emails to crews, which has improved communication.

Right now, the company is testing a homegrown application (built on the Google Apps platform) that will allow workers to report their hours, track equipment, and report other job-related data to help the company better manage costs at each site. The custom application will allow employees to view work orders, fill out time sheets, list all equipment in use, enter building materials as they arrive, and access other job site details. “That information will go into a database, and we’ll be able to compare it to the original project budget,” Tully says.

Once that application is deployed, Tully says the company will have a much clearer view of job profitability. Currently, the company has to wait 30 to 90 days to get a clear estimate of the profitability of each job. “We will be able to do that in real time, and that helps us get our completion margin closer to where it should be when we are bidding out jobs,” Tully says. “If costs on a job are eating up our margin, we know we need to bid that type of job higher the next time. Since we’ll be getting information in real time, we’ll also have an opportunity to see if there are costs we can control while the job is still in progress.”

MDM Provides Remote Management, Security Capabilities
The AirWatch solution secures the tablets, allows Tully to push applications and updates to the devices, and sets data limits for the tablets to help manage wireless costs. The company also uses the Apple Configurator product to manage which applications are on the devices and to restore any devices that have been damaged. Since many of the field crews shut down over the winter, the devices are backed up, wiped, and put into storage for weeks at a time. Once the crews are back to work, the devices are restored using the Configurator software.

AirWatch also provides critical security functionality. “Initially, we wanted an MDM solution to help us corral all these new mobile devices, so we wouldn’t have to set them up one by one,” Tully says. “But we realized that with all the data on the devices, we would have an issue if there was no security in place.”

AirWatch allows Tully to lock down and wipe data from lost devices, a feature that he has already taken advantage of. “Within the first three months, we had an employee lose a device,” he says. “I located it using AirWatch, wiped it, and let him know where it was. Luckily he was able to retrieve the iPad, so we restored it from backup.”

The company plans to expand the AirWatch solution to its Apple MacBooks and other devices. “Having an MDM solution is really important for managing and securing our data,” Tully says. “As a small company, especially just coming out of a rough economic period for construction, it’s really important that we hold on to our data.”