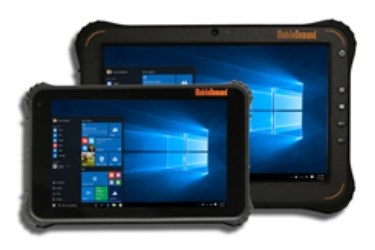 The 10.1” xTablet T1500 and the 8” xTablet T8500 are the latest tablets added to an already broad family of devices. MobileDemand offers the widest variety of rugged tablets in the industry.

CEDAR RAPIDS, IOWA (PRWEB) - Leading rugged tablet innovators, MobileDemand, have announced the addition of two new powerful yet affordable Windows devices with barcode scanning capabilities. The 10.1-inch xTablet T1500 and the 8-inch xTablet T8500 are engineered specifically for the mobile workforce, where productivity is priority and device downtime is not an option. MobileDemand now offers the broadest array of tablets, proving their dedication to providing the right tools for the job.

Microsoft Windows – The Most Secure Platform for the Modern Enterprise – Both devices run Windows 10 Professional, the operating system which gets more work done in less time while keeping your data secure. It’s the OS that has become the standard for many of the largest corporations across the globe due to its breadth of functionality and ease of navigation.

Built Rugged for the Real World – For heavy duty applications both indoors and outdoors, the rugged ability of the tablet is imperative to the job in that device failures need to be few and far between. The new devices from MobileDemand deliver an unparalleled level of durability compared to similar priced devices. The dust and water sealing rating for the xTablet T1500 and xTablet T8500 is IP65 and IP67 respectively, which is considered highly sealed. Both tablets will easily handle drops from four feet to concrete and come standard with rubber bumpers and a screen protector for added device protection.

It's More Than Just a Tablet – It’s a complete system. Different applications and jobs require different functionality and accessories. Add on a barcode scanner for inventory tracking or POS, deploy tablet mounts for a space-saving work station or utilize the GPS function for field applications. xTablets enable businesses to operate in ways never before possible and take productivity to new levels.

The Most Robust Family of Tablets – With the addition of two new Windows tablets, MobileDemand now offers the widest range of ruggedized devices on the market. The entire MobileDemand line is engineered to do more work in less time, from the 8-inch cloud-based tablet to the fully rugged, Class 1 Division 2 workhorse and everything in between.

“These two new rugged tablets create a new class of rugged devices for line of business applications. The fully rugged Windows 10 tablets, at a price point near $1,000 with barcode scanning capability, fits nicely between value priced and high performance rugged tablets in the industry’s largest and most complete rugged tablet device family,” says Matt Miller, MobileDemand President and Founder. “The new xTablet T8500 an xTablet T1500 set a new standard to provide a value for performance, ruggedness, functionality and price. MobileDemand is the leader in offering a variety of rugged tablet platforms for various applications, allowing our customers to choose the right tool for the job and budget.”

With a broad family of rugged tablets to choose from, MobileDemand is your one-stop shop for powerful, all-weather Windows® tablets. xTablet ruggedized devices are the ideal tools for improving operational efficiency and allowing mobile workers to make better business decisions at the point of interaction. They offer a high resolution, all-light readable touch screen, functionality of a full Microsoft Windows OS and the power of an Intel processor to deliver performance at a lower cost and enable greater efficiency and productivity in the field. Tablets start at only $595. Additional information about MobileDemand is available at http://www.RuggedTabletPC.com.