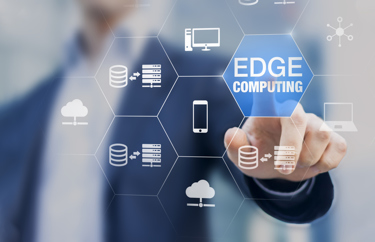 There’s nowhere to run and nowhere to hide. That’s the entire point of edge computing as it is designed to bring the server directly to you. This concept is evolving and expanding quickly, and if you’re not onboard yet, you’re behind the curve. But no need to fret, there’s still time to implement it. And when you do, the amount of efficiency you’ll see after leveling up is worth it. Here’s a brief primer on edge computing, and how it’s shaping the shipping and distribution industries.

What Is Edge Computing?

Unlike traditional cloud computing, edge moves away from a centralized server all the way out to the edge of the network and closest to you. Within its framework and practice, data is gathered, processed, and analyzed at the point nearest to its origin and results are transmitted to a cloud for viewing, reporting, and sharing. Instead of going to the cloud, the cloud is coming to you, so to speak.

A very simple example: imagine asking one of your smart devices a question – Siri, Alexa, etc. “Alexa, what is the weather like today?” While it doesn’t seem significant, it will take a few seconds to respond to you. That’s your question traveling to a cloud, then to one of Amazon’s massive processing centers, likely in a major metro area and not necessarily anywhere near you. Alexa then comes back to you with the information requested. Edge computing processes much faster.

Cloud computing requires collecting … and then processing … and then analyzing, all within a data center that is nowhere near the source … and then waiting on a specific subset of necessary data to be returned.

Edge compute pulls the rug out from under all of that. Even when a network cloud connection isn’t available, edge gives you your data and logic significantly faster.

How Is Edge Affecting The Transportation And Distribution World?

It is affecting it and evolving along with it faster than you might imagine. Edge computing is predicted to grow to 75% by 2025. That is an astonishing number by any standard. The speed and efficiency brought to industry via edge computing are simply too attractive and too valuable to turn down. In the logistics industry, with warehouses more automated, building on-site computing for data will be a necessity for quick data retrieval. And when shipments are moving in transit, having computing points close to the actual source also will be a necessity so they (barring exception) won’t be slowed down on the way to the end location.

You’ve undoubtedly read about autonomous vehicles, including horror stories of crashes. I can assure you that driverless vehicles will play a substantial role in the entire future of the transportation, distribution, and logistics industries in full. Although these autonomous vehicles will add ease to the process of moving goods, they can only function safely and efficiently using edge computing. The enormous amounts of data created -- then the obvious necessity to quickly process that data -- demand the computing that only edge ideology can provide. It simply won’t function properly without it and necessitates its expansion.

What Are The Security Concerns?

You won’t be surprised to read that the security concerns are significant. One survey found that about two-thirds of IT teams saw edge computing as a potential threat to their companies and organizations. We’re dealing with incredibly fast, nearly seamless automation in a lot of these cases. One threat actor getting to one machine could cause more than headache, and possibly a catastrophe.

As edge becomes more widely implemented, more threat actors and ransom operators will turn their eyes to it. Updating and patching will be an unwavering constant and likewise for quality staffing that can manage both that and the larger-picture security in full. Zero-trust security is paramount when it comes to edge, both in your security and in your monitoring. Threat detection needs to be distinctly proximate, not nebulous and scattered.

However, and it seems a rather microscopic example in comparison to the vast expanse of big picture edge computing, the security, and privacy provided by an iPhone is a fine example of edge computing. By virtue of encryption and the storing of biometric information, Apple offloads a significant amount of security concerns from a centralized cloud to its users’ devices. This is going to be one of several case studies to look to when we’re dealing with security in this realm.

The world is moving toward automation, and logistics industries must move along with it. Businesses and customers alike are demanding the ease and efficiency that automation can bring. However, these technologies and devices that we are moving toward and that will shape the future, need the fast processing only edge can bring. There’s nowhere to run and nowhere to hide because the time to implement edge computing is now.

An accomplished AWS Certified Solution Architect, Jim Demetrius brings over 30 years of experience helping organizations to implement highly secure and cost-effective solutions that can grow with their business. Working with many notable Fortune 100 companies, he has worked in all aspects of the IT business life cycle, garnering in-depth knowledge on complex managed hosting, cloud, colocation, and hybrid computing.