The Next Phase Of IoT: From Connecting Devices To Leveraging Information 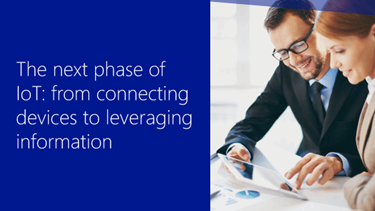 Oftentimes, a hot new business concept had its real beginning much earlier than anyone realizes. Take artificial intelligence as an example. The technology actually debuted at a conference at Dartmouth University in 1956. At the time, there was a lot of optimism. Some people at the conference believed robots and AI machines would be doing the work of humans by the mid-1970s. Of course, that did not happen -- what happened instead was that funding dried up and a period called “The AI Winter” began. That lasted into the late 2000s, when artificial intelligence again became a business and funding focus.

Connected devices (the Internet of Things) are similar in this regard. There have been versions of machines communicating with one another since the early 1800s, and in 1982, graduate students at Carnegie Mellon connected a Coca-Cola machine to the Internet. The term was most likely coined in a 1999 presentation given at Proctor and Gamble. The presenter was linking RFID technology to P&G’s supply chain to the (new-ish, at the time) idea of the Internet.