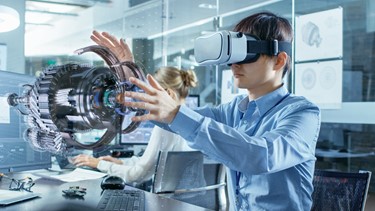 Novel technologies and markets share very similar patterns: a hype cycle, followed by a steep decline as realistic barriers and obstacles become more apparent, ultimately followed by substantial growth as those barriers are overcome. The speed at which these new technologies and markets catch on is based on an amalgamation of near infinite factors, with the fastest growing opportunities often the ones with the most objective, understandable value in usage outweighing and outpacing those barriers.

In the years I’ve been covering augmented reality, this has proven continually true; proven value is so easily and so often paired with aggressive forecasts and exciting ROI metrics, for good reason.

Augmented reality can mean many things to many people; for myself and ABI Research, augmented reality is a top-level market segment, and extends beyond a specific device type. Within augmented reality, we are discussing any device and application that allows for see-through data visualization, whether head worn with smart glasses or handheld through a smartphone or tablet.

ABI Research estimates the total augmented reality market to reach over $100 billion by 2024, at an average CAGR of 75%.  The mainstay early adoption verticals like Manufacturing, Logistics, and Energy are still showing impressive growth, while newer verticals like healthcare, media & entertainment, and retail/commerce/marketing are the fastest growing.