Rugged tablets and custom software help this service provider save one to two hours per day by eliminating paperwork and reducing data entry errors. 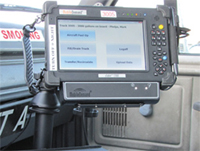 Taughannock is a fixed-base operator (FBO) at the Ithaca Tompkins Regional Airport in New York, providing aircraft charter, refueling, maintenance and avionics, storage facilities, and concierge services, along with long-term aircraft management for corporate and private plane owners. The company fuels approximately 6,000 aircraft per year, issuing nearly 1.4 million gallons of fuel. According to Erik Balcome, FBO manager at Taughannock, the company’s fueling operations on the airfield were antiquated when it came to inventory management. “We had a lot of manually generated paperwork for collecting data and reporting on the services we perform for our customers,” he says. “It took a lot of time to reconcile all of that information, and we had a fair number of errors to correct and chase down. It was evident we needed to increase our efficiency.”

FBO processes are fairly specific to the airport market, so the off-the-shelf inventory management software options that Balcome found either didn’t fit the company’s business model or were too complex and expensive. “With the approval of Taughannock’s owner, we decided to build our own,” Balcome says. Coincidentally, an aircraft owner in Ithaca who is an affiliate of Taughannock turned out to be a software developer — Chris Camadella of Vroom Consulting.

Eliminating Paper At The Pump
With Camadella’s expertise, Taughannock was able to develop a software solution based on existing operational processes. Balcome decided to start by tackling fuel management. Before the new solution was developed, fuel management processes were completely manual and paper-driven. Employees generated and delivered multipart meter tickets and wrote down how much fuel was dispensed to each aircraft, as well as storage tank and truck levels. Camadella and Balcome’s solution, called PerformaFuel, is an integrated inventory control solution that commences with data collection at the point of fueling and provides real-time inventory visibility, statistical analysis, and automated reporting for the company and its customers.

Total development time was approximately eight months for the initial database and desktop data management application, which went live in December 2010. Taughannock then needed to choose a device that employees could use for data collection on the airfield at the point of service. Balcome selected the MobileDemand xTablet T7000 because it ran the full Windows 7 operating system, had multiple peripheral and data input options, used wireless communications, and could be used to collect data while docked in the vehicle or carried on the airfield.

Realizing The Value Of Rugged
Initially, Balcome says he thought this type of rugged device may have been more than the application called for. “But when weighing the cost against durability and functionality, eventually cost became less and less important,” Balcome says. “I realized that whether the device cost $1,000 or $3,000, it wouldn’t matter if it didn’t keep working for an extended period of time without failure and it wasn’t flexible enough to expand with our needs. The full Windows platform on the MobileDemand device made it easy to interface with our database or any other Web-based application. The optional components were nearly endless; with the different ports, we could add wireless, printers, magnetic stripe readers, and RFID readers, so these options made it appealing.”

The MobileDemand tablets are indeed rugged; the devices have an IP54 rating against dust and water and a MIL-STD 810F rating for drop, vibration, and humidity. They can also operate in temperatures as low as -20°C. “We wanted to ensure that operations or platform expansion would not be limited by the possibility of hardware issues,” Balcome says.

The company has deployed two of the tablets on the airfield and has a third unit on hand for testing and demonstrations. Now, instead of relying on paper tickets, line service technicians (LSTs) use the tablets to collect aircraft fueling data, including the tail ID, the type of aircraft, the flight number, and what type of fuel was used. The application captures how much fuel was issued or defueled, what the tank levels are, and records any recirculations or fuel transfers between tanks and trucks. That data is wirelessly transmitted back to the desktop application.

The company has reduced paper at the point of fueling by automatically generating electronic meter tickets. For those flight crews that do require a paper ticket, the trucks are equipped with Brother Mobile PocketJet 6 thermal printers.

Taughannock also drastically eliminated data entry in the back office. According to Balcome, the company has saved one to two hours per day. “We used to have to collect these paper tickets and truck logs, manually enter everything into various spreadsheets, reconcile logs against those, and then generate reports based on individual customer needs. Now all of that back office work is done for us. Once the data is in the system, we can effectively monitor what’s happening instead of spending all of our time managing spreadsheets,” Balcome says.

Accuracy has also improved. “We’re not performing these calculations on paper or doing them in our head anymore,” Balcome says. “Errors have dwindled drastically. We also don’t lose tickets, because everything is electronic.”

Taughannock is able to monitor fuel levels in the trucks and storage tanks at the airfield, balance inventories in real time, and forecast fuel needs for operators, while providing more accurate records of fuel usage. Because the tickets are generated electronically, customers also can remotely recall these records online. “As soon as the airplane is fueled, customers can access their exclusive data via the Web,” Balcome says. “This is a very attractive feature for fuel vendors servicing airlines.”

Looking To The Future: Mobile Payment
Currently, flight crews have to go to the Taughannock office to pay for fuel. The next modification to the system will be adding magnetic stripe readers to the tablets so crews can pay on the ramp. Taughannock’s fuel supplier also will leverage the tablets when the company serves as the beta test site for the supplier’s Web-based payment processing program. Eventually, the company hopes to expand the use of the tablets into other operational areas, such as its aircraft maintenance, as well.