The Utah Transit Authority improves on-time performance by 30% with a mobile solution. 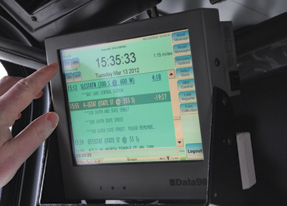 In public transportation, timing is everything. Passengers rely on buses and trains to get them to work, to the store, across town, and back home, so they need to know when they’ll be picked up and dropped off — and those times have to be consistent and predictable.

The Utah Transit Authority provides bus and rail service in the state’s major metro areas. When route reliability became an issue several years ago, the UTA deployed rugged mobile computers and custom application software on its bus fleet that have helped improve on-time arrivals and departures by 30% and enabled additional applications that have improved customer service and fare collection.

The UTA deployed the mobile computing solution in order to replace the existing terminals, which Kyle Brimley, UTA’s manager of technology development, describes as “glorified clocks” that helped keep drivers running on time. UTA wanted an upgraded system that would alert drivers when they were arriving or leaving a stop late or early and report location and scheduling information back to the bus operations offices.

“We wanted something with a user-friendly GUI (graphical user interface) and a touch screen so we could provide more information to the drivers,” Brimley says. “We could not find an application that would do what we were looking for, so UTA decided to build it ourselves.”

In order for this system to work, the buses had to be equipped with modern, rugged mobile computers that could provide access to the entire route/planning database, while providing visual and audible alerts to drivers about their route status. The UTA selected the M-Series computers from Data911.

“It’s a self-contained computer. It didn’t have a fan that could break down, it was ruggedized, and it had a touch screen display,” Brimley says. Because the terminals had to be mounted near the driver’s seat, Data911 modified the M-Series design to provide slightly smaller units (with 13-inch monitors instead of 15-inch) to accommodate the lack of space at the front of the bus. UTA also worked with Data911 to develop power management tools to accommodate the “dirty” power (prone to spikes and surges) available on the buses, which could affect the performance of the computers.

Brimley’s team, meanwhile, developed a .Net/Windows XP software application that would alert the drivers when they were arriving or leaving on time, early, or late. Using GPS functionality, the UTA was also able to automate stop announcements so the drivers know when to make the announcement and which stop is next on the route.

The UTA has installed 640 units on its buses and keeps another 60 units on hand as replacements. They refresh the hardware every six years and are currently using the Data911 M7 computers.

All of the UTA’s trips and routes are downloaded onto the Data911 devices. Drivers log in to the touch screen unit each morning and then enter their badge number and block number. The routes assigned to the driver are automatically called up on the computer and provide the next seven stops on the route and what time the bus has to be at each one. (Routes are assigned using a homegrown dispatch solution, which evaluates the availability of buses and drivers.) Color-coded indicators on the touch screen alert the drivers when they are arriving early or late. During the route, dispatchers can also send messages to the drivers via text. If the driver encounters an emergency situation, they have a limited ability to send messages back to the dispatch center (as long as the bus is stopped).

With real-time feedback on their performance, Brimley says on-time arrivals and departures immediately improved. “We were running in the 50% range of reliability; as soon as we installed the new system, it jumped to 70%,” Brimley says.

Now, the buses are between 85% and 90% on time for arrivals and departures, and thanks to the GPS functionality, the UTA has full visibility of the entire bus fleet. “That means that 85% of the time they are leaving within between 1 second and 4 minutes and 59 seconds of the schedule time, and that continues to improve,” Brimley says. “We know exactly where each bus is going and if they are on schedule.”

With real-time data on bus location and driver performance, UTA also has been able to better optimize its routes, as well as leverage that data for other functions. “Now we have real-time tracking for maintenance purposes, for planners, dispatchers, and all these other departments that can use the information about where the bus is,” Brimley says.

Since the initial installation, the bus service also has added electronic fare collection on the devices, using the eO Open Payment solution from Vix Technology (formerly ERG). Passengers can use contactless smart cards to pay their bus fare, and the payment data is displayed on the Data911 display so the driver can see that payment was completed. Payments are also tied to GPS locations, which helps UTA track system usage.

Having the data terminals and GPS functionality on the buses has enabled new customer service applications, too. “We are developing a texting/ SMS application so that if you text a short code and put a bus stop number in, we can predict what buses are coming through and at what time they will depart,” Brimley says.

UTA also has made its data feed available to three app developers who are creating mobile transit applications for smartphones. With the data from the rugged computers, UTA can help enable more customer-facing applications that can improve service to passengers. “A coffee shop near a bus stop could make that information available on a display board, for example,” Brimley says. “There are unlimited capabilities once you have that data available.”