The day-to-day management of public works operations in a small community can be challenging. With limited resources, keeping paper-based records organized and up to date consumes countless hours and can result in data errors or omissions. The city of Margate, FL, has solved this problem with mobile computers and GPS technology. In addition to saving time and reducing paperwork for the public works department, the solution has also ensured compliance with federal record keeping and reporting requirements, while improving efficiency. 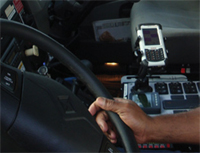 Margate is a small city of 53,000 in Broward County. The mobility project grew out of an idea that public works director Sam May had for tracking the city’s street sweeper and mosquito-spraying trucks.

“There were a lot of companies that had devices that would provide the GPS location,” May says. “What I wanted was a way to track when the broom was down on the street sweeper or when the unit was engaged on the mosquito sprayer. We wanted the driver to be able to track his own progression, what he’s done, and where he’s been. For the mosquito sprayer, we could use that information to meet guidelines for reporting to the Florida EPA.”

May’s first thought was that the solution would need a mechanical component that would be attached to the equipment on the trucks. Then he encountered the Atlas360 software solution from Greenville, SC-based integrator Logic Concepts at an American Public Works Association (APWA) meeting.

The Logic Concepts system solved what May had considered one of his primary challenges. Instead of interfacing the mobile computer or GPS unit with the equipment on the truck, operators simply push a button on the user interface of the mobile computer to note when equipment is in operation. May says that the company was also willing to customize the software to fit Margate’s needs.

“We quickly saw that the system would do a lot more than we were originally looking for,” May says. “They’re also a development company, so they could make the system fully customizable for us.”

Nick Cucunato, division leader for storm water in Margate, adds that the solution had a very simple interface that could be adapted for a much wider range of applications within the department. “It’s all based on customizable drop-down menus,” Cucunato says. “There are a number of issues that go along with storm drain maintenance, and you can list them all and put in whatever parameters you want.”

Employees Influence Software Development
In order to develop the menus for each application, employees were brought in to the development process. “When developing the software, we sat down with everybody concerned and asked them what information they wanted in the system and what they needed it to do,” Cucunato says.

That early user input helped guide the development of the application and has encouraged further employee participation in improving the system. “I don’t think that process will ever end,” May says. “People are always going to find new ways to use this. And if they can think it up, I can call Logic Concepts and try to make it happen. That’s why we wanted it to be fully customizable.”

Logic Concepts demoed several mobile devices for the Margate team, which ultimately chose the Nautiz X7 computer from the Handheld Group because it met the client’s requirements for a rugged computer. “We told them what we needed and that it might be dropped in water,” May says. The IP67-rated device can withstand multiple drops to concrete and operate at temperatures from -22 F to 140 F.

When the operator of the street sweeper or the mosquito- spray truck heads out on their route, they take the mobile device with them and install it on the builtin mount. The GPS technology on the device automatically creates a “bread-crumb” trail of where the vehicle has gone. When the equipment on the truck is engaged (i.e. the street sweeper broom), the driver simply pushes a button on the screen to indicate when the equipment is turned on and turned off again.

Training didn’t take very long. “It took one session to show them the menus and how to access everything,” Cucunato says. “There were some questions the first couple of weeks, but otherwise it’s very intuitive.”

The Atlas360 solution is integrated with the city’s Esri GIS solution. That integration allows managers to see a map view of where all of the equipment was in operation each day. “The drivers can see everything they’ve done for the last month and determine if they’ve missed any areas,” Cucunato says. “If a homeowner calls us and says the street sweeper hasn’t been down their street in a long time, we can check that on the map. The driver can even note if there was a car parked in front of a specific residence by selecting that from the drop-down menu while he’s running the sweeper, so we can check that information later if we need to.”

Drivers also can take note of any other conditions that might be of interest to the department, like cracked sidewalks or low-hanging branches. They can use the Atlas360 software to note the issue from a drop-down menu, tag the data with a geographic location, associate it with a known address, and automatically generate work orders and reports. “Once the data is collected, we can export it into any type of report or format we want,” May says.

Mobility Enables Automated Compliance Reporting
The system has only been in operation for eight months, but the public works department already has found numerous other uses for the technology beyond the original street sweeper/mosquito sprayer application. The mobile devices also track right-of-way herbicide spraying, asset management, drain cleaning, and aquatic herbicide application.

For catch basin cleaning operations, employees can note the location of any work, take digital photos of the catch basin, log inspections, and list all work performed. For herbicide application, employees can track how much chemical they used and where they sprayed it. “In the past, they would have to come back in and write everything down, then type it into an Excel spreadsheet,” May says. “Now, once they dock the device to the computer, they can automatically see how much chemical they used, the location, and how much area they covered each day.” That data is then exported into a report and submitted to the National Pollutant Discharge Elimination System (NPDES) permitting program.

The city is also using the devices as part of its canal bank stabilization project, which is funded through a federal Natural Resources Conservation Service (NCRS) grant. “We have to do a lot of documentation for that grant,” May says. “We’ve been able to take photos and tag them with GPS coordinates. We can document everything we’re doing using the mobile device and then automatically create reports for us for the NCRS.”

By eliminating handwritten reports, May and Cucunato estimate that each employee has saved an hour per day that was previously needed to write reports and key enter data. “There were times when the guys would forget to write a report, or they had to wait a few days to finish,” May says. “Then they’d have to try to recreate everything from memory. This takes the human element out of it. They don’t have to worry about remembering the details, because they can have photos on the device and tie those to a specific address, so the reports are more accurate and complete, too.”

May and Cucunato say they are exploring other possible uses for the technology, both within the public works department and in other city agencies. “The water department could use this for repairs. The police department has nothing like this; they do everything on paper for code enforcement,” Cucunato says. “It’s fully customizable, which is the great thing about it. We’ve only scratched the surface of what this can do.”