Companies deploying mobile field service solutions occasionally make mistakes in equipment selection, either choosing devices that aren’t rugged enough for the application or that aren’t being used in a way that quite fits their intended design. Ryko Solutions, for instance, had to take a second look at the printers it initially deployed for its field service automation system in order to improve performance and reduce replacement costs. 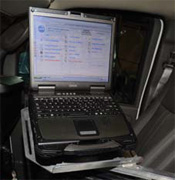 Ryko is one of the leading suppliers of carwash equipment and chemicals in the United States. The company also operates a nationwide service division for installing and repairing its equipment. In 2002, the company deployed a mobile field service solution for its 200-vehicle fleet. Prior to that deployment, the service operation was completely paper based. Technicians carried carbon sheets to generate multiple copies of work orders and invoices, and all of the information collected while they were in the field had to be manually entered into the company’s computer systems. Oftentimes, this data entry was delayed until weeks after the service call. Because of the delay in data entry, Ryko’s billing cycle was longer than it needed to be.

In addition, technicians had to carry shelves of repair manuals and product schematics in their trucks. Flipping through numerous manuals to access that information took extra time during the service call, negatively impacting technician productivity.

Because its employees work in dirty and wet environments, Ryko deployed a mobile field service solution on a combination of ruggedized Panasonic Toughbook and Getac laptops. The laptops are loaded with a mobile version of the company’s Lotus Notes enterprise business system, which handles work order management and dispatching. All of the schematics and repair information are already loaded on the laptop, so techs were able to get rid of the paper manuals and instead quickly pull up the information they need without leaving the jobsite. Technicians use the devices for time entry and dispatch, eliminating the data entry that existed postservice call.

“We use the mobile solution for everything we do in the field,” says Tracy Beer, regional service manager at Ryko. “We can access work orders, create repair proposals, access schematics, and print out quotes for customers. Our sales team uses the printers for sales quote and other documents, too.”

Identifying The Need For Thermal Mobile Printers
When the company first deployed the mobile solution, technicians initially traveled with small, desktop-style printers in the vans. “They worked well, but they really weren’t meant to bounce around in a van,” Beer says. “We found ourselves frequently having to replace them.”

In an effort to reduce replacement costs, the company switched to PocketJet mobile thermal printers from Brother Mobile (originally, the printers were part of the Pentax line and Brother has since acquired Pentax). The PocketJet printers are mounted in the vehicles using brackets specifically designed for the equipment.

“The printers take a lot less space in the vehicle, and on cold mornings we don’t have any issues with the ink being too thick because these are thermal printers,” Beer says. “They also last longer, since they’re designed to be mobile, which has really reduced our replacement costs.”

Mobile Solution Eliminates Paper Manuals And Paperwork
Dispatchers send work orders directly to technicians' laptops throughout the day. Technicians enter all of the job information into the system on the laptop, including the amount of time they logged on the job. All of this information is uploaded wirelessly to the company's central business systems for payroll and billing processing. The local service manager reviews and approves all of the submitted documentation.

Eliminating the paperwork techs did after the service call and the manuals they frequently had to reference during a job, delivered a number of improvements to the service operation. "The transformation from a paper-based world to mobility was really like night to day," Beer says. "The techs literally used to carry shelves and shelves of books with them, and now they don't have to have any of that. It's all been replaced by the mobile solution."

Invoice processing is now instantaneous, since the information is wirelessly uploaded as soon as the technician obtains a customer signature. "Before, we'd collect those invoices in the field. Some areas would have field secretaries where they would key the work orders into our computer system. In other areas, once a week you'd be required to take them to a UPS store and ship them for processing."

That process added a week or more to the billing cycle. "Accounts receivable is a lot faster now," Beer says. "We have multiple updates throughout the day in terms of where we are in accounts receivable. Before, we were working off a spreadsheet that was maybe a month old or more.

Moving to a computerized solution also eliminated problems associated with sloppy handwriting. "In each work order there is a comments section, so the technicians can type in any notes about the job," Beer says. "You're not trying to read somebody's lousy handwriting and interpret what they were trying to tell you. It's a lot more professional and has had a positive impact on productivity."

Putting Mobile Printers To Work
Field staff use the mobile printers to print out work orders, preventative maintenance checklists, and other documentation for customers. Technicians print out two copies of the invoice, one for the customer and one for their own documentation. (While the work order information is automatically uploaded into the company's main systems, the additional paper copy is also kept on file.) Once the customer signs the invoice, the documents are scanned on site using a USB-powered, handheld Brother DSmobile 600 scanner in the vehicle.

With the exception of the new Brother mobile printers being put into place, the overall mobile solution has remained largely unchanged, other than regular updates to Lotus Notes. Approximately three years ago when Ryko replaced its original printers with the new Brother Mobile PocketJet 6, which includes Bluetooth connectivity. That upgrade eliminated the cable connecting the printer to the laptop.

Beer points out how the company has come to rely on its mobile solution. "The mobile solution has streamlined operations for the field service technicians, as well as for back-office staff that no longer have to manage the large volume of paperwork coming in from the field," she says. "We'd be lost without it."