Mobile Computing Takes A Bite Out Of Crime

With a new mobile citation system, the Sand Springs Police Department has been able to boost revenue from citations by nearly 65%.

Police work may look glamorous in the movies and on TV, but in reality officers spend a lot of time filling out and filing paperwork. The Sand Springs Police Department in Oklahoma, however, has deployed a mobile citation solution that has eliminated paper forms and duplicate data entry, boosted revenue from more accurate citations, and is expected to provide a five-year return on investment of nearly half a million dollars. 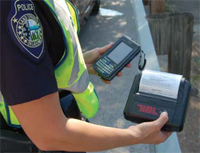 The officers of the 30-man Sand Springs PD (SSPD) do their best to keep the 19,000 residents of this Tulsa suburb safe and secure, but paper citations were bogging down administrative staffers. Three years ago, the department began looking for a way to automate its citation processes. Previously, officers used five-part carbon copy citations that were hand written. The violator would receive one copy, while the rest were distributed to police, court, and city personnel to be key entered into various computer systems.

Manual Methods Ruin Revenue Opportunities
This resulted in redundant data entry, administrative overhead, and mistakes, since citations were sometimes lost. If the citations were illegible, they were often dismissed, which meant the city did not receive revenue due from the related fines.

“There was a lot of duplication of effort,” says Mike Carter, SSPD assistant police chief. “We’ve embraced a philosophy of touching data only once. We really don’t want people inputting data and then having a records clerk duplicating that data. It’s inefficient, and it’s a source of errors when you have that many people touching that data so many times.”

Carter says the department heard about a new electronic citation system called digiTICKET from Saltus Technologies. They approached the company, and after seeing a demonstration the department became a beta test site for the software. The SSPD opted to run the solution on the rugged CN50 mobile computer from Intermec, coupled with a mobile Datamax-O’Neil microFlash 4te (MF4te) printer.

Officers use the mobile computers to scan a violator’s driver’s license bar code, then complete each ticket on the screen. The digiTICKET solution allows officers to capture electronic signatures, photographs, GPS coordinates, and voice-directed officer notes, and then print a copy of the citation for the violator using the mobile printer. At the end of each shift, officers upload the citation data directly into the digiTICKET Web application when they dock the mobile computers.

The SSPD worked with Saltus to emulate the existing paper forms on the mobile computers. “The officer can scan the license, and that populates all areas of the citation,” Carter says. “We also have some required entry fields, so the officers can only serve citations for the laws as they are written in a specific ordinance or statute. That keeps things consistent.”

That eliminated the problem of officers inconsistently issuing citations for similar offense (for instance, writing a ticket for disturbing the peace versus disorderly conduct). “You can also only write for an offense that happens in our jurisdiction,” Carter says. “That has removed errors that could get a citation dismissed in court.”

The citations are automatically loaded into both the police department and court records management systems, which has reduced administrative costs and data entry errors. “We had to have interfaces built to accomplish that, but that’s the magic of the system,” Carter says. “From an administrative point of view, once the device is synced, the citations go to those two systems. Previously we had records clerks spending thousands of hours a year entering that data.”

Mobile Technology Investment Pays Off Big Time
According to Carter, citation revenue has increased by nearly 65% since the implementation, because the department is no longer losing documents, and fewer citations are getting dismissed. Administrative expenses have been reduced by $8,500 annually through reduced data entry. Time to issue citations has also been cut by 50%, which makes the officers more productive in the field. The department expects a five-year return on investment of close to $500,000 through reduced costs, increased revenue, and improved productivity.

Be Patient: Mobile Worker Resistance Will Pass
Although a few officers initially resisted the new system, the benefits were readily apparent once the computers were in the officers’ hands. “To give you an example, I had an officer who was pretty resistant to the program at first, and a few months in we did our first software upgrade, so he didn’t have his device,” Carter says. “While he was waiting to get it back, there was a four-car collision. He came in and asked if he could have the mobile computer back before he had to issue all of those citations.”

Records clerks can now work on tasks other than data entry, and Carter says employee stress has been reduced, since clerks no longer face piles of handwritten citations each week. “They’re just looking for errors in the citations now, and they can do other things,” Carter says.

The department is preparing to integrate the mobile devices with in-vehicle systems via a MiFi wireless device that will allow officers to uploaded data in real time from the field. “We’re very happy with the reliability of the hardware and the service from Saltus,” Carter says. “It’s been a godsend for our agency, and we really think mobile computing is going to be the standard for citation technology going forward.”