Many fleet management solutions have grown into sprawling suites that provide everything from maintenance management to fuel-tax reporting. But for a lot of fleet operators, particularly smaller ones, the primary benefit is still real-time location data. 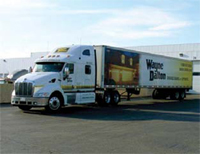 Wayne-Dalton operates a private fleet of 40 leased trucks for shipping finished product to distributors and for picking up loads of raw materials from suppliers for its 16 manufacturing facilities. The trucks make approximately 800 pickups and deliveries per month.

Previously, the company used a mobile phone-based fleet tracking solution that did not provide the type of real-time data Wayne-Dalton needed. The problem: the wireless carrier involved did not provide adequate coverage in the rural areas where Wayne-Dalton’s drivers operate. “If they got 15 or 18 miles out, we could lose track of the trucks because the coverage wasn’t there,” says traffic manager Vince Pizzoferrato.

Drivers are responsible for calling customers and suppliers from the road to provide updates on their arrival times. Pizzoferrato says the company wanted a simple solution that would provide reliable communication with the driver, as well as upto- the-minute location data for the trucks. “We’re not a trucking company,” Pizzoferrato says. “We’re a garage door manufacturer, and we deliver our own product. Our focus is on customer service.”

Choosing Mobile Device-Based GPS Tracking
When the company switched carriers to the Verizon network, their Verizon rep suggested they take a look at a similar fleet tracking solution from Xora. The Xora solution does not require installation of GPS equipment on the vehicles. Instead, drivers carry GPS-capable Samsung mobile phones that have been loaded with the Xora application. Location data is transmitted back to Xora, and Wayne-Dalton staff can access the data through an online portal. All drivers have to do is turn their phones on when they start their shift.

Suppliers post new shipments that are ready for pick up to a Wayne-Dalton website. The inbound load planner looks at these postings each day, then takes a look at the location of the fleet in the Xora portal, and begins planning which trucks will take care of which raw material shipments. “We have an immediate view of the trucks without having to call the drivers,” Pizzoferrato says. “Our planner can start that planning immediately, and we have a graphic representation of what needs done.”

Having that visibility has eliminated the manual process of tracking drivers and re-arranging schedules. “We are constantly bombarded with pickups for raw materials and with changes from the customers,” Pizzoferrato says. “Now we have an immediate representation of where the trucks are, and we can make decisions instantaneously, because we don’t have to gather that data manually.”

Fleet Management Enables Improved Customer Service
One of the primary benefits of the new systems is that the company can easily respond to customer queries about delivery times. “The drivers call the customers, but I may still get a call with a customer concern,” Pizzoferrato says. “I can see exactly where that truck is and how far out they are from the location. With the old system, I would have to pick up the phone and call the driver. Now we have 100% accurate information.”

The company also uses the new visibility to help assign third-party freight loads for drivers who would otherwise return to headquarters with an empty trailer. If a pick-up is needed, Pizzoferrato can see if a driver is close by who can take care of the extra load on their way back to the depot. According to the company, this has helped reduce approximately $1,000 per load in operating costs.

How To Improve The Safety Of Drivers
The previous solution did not include any type of messaging functionality, so if a driver had to be contacted, staff had to call the driver. This was not only time consuming, but communication was further complicated by Department of Transportation (DOT) guidelines that require hands-free communication while a vehicle is in operation. Now, Pizzoferrato says, he can easily send a text message to the mobile phone via the Xora application, which the driver can access at his next stop.

The location data also has helped Wayne- Dalton improve safety and reduce liability. In one case, a company driver was accused of leaving the scene of an accident. Using Xora, the company was able to prove that the driver turned around and returned to the scene.

Expanding On Today’s Mobile Workforce Management
Eventually, Pizzoferrato says, Wayne-Dalton will expand its use of the system by adding customer locations and contact information to the Xora database so drivers can more easily access addresses and phone numbers from the road, along with turn-by-turn directions. They may also take advantage of the system’s geofencing capabilities.

“We don’t use the system to its full potential,” Pizzoferrato says. “There are a thousand more things we could do with it that we don’t do yet. We’re looking at taking those next steps now.”