Public safety force leverages a mobile VPN to ensure officers have reliable access to necessary applications at all times in the field.

Public safety forces were among the first to embrace mobile computing and real-time wireless connectivity in the field. As these systems have migrated to cellular networks, however, many municipalities have faced a challenge in maintaining application persistence when wireless coverage is spotty, while also ensuring that the wireless connection is secure. 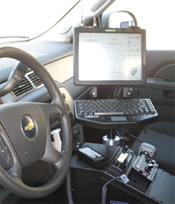 That was the issue facing the City of Tyler, TX, ten years ago. The police and fire departments had been using laptops in their vehicles for years. When the decision was made to wirelessly enable these devices, new CIO Benny Yazdanpanahi had to find a secure and reliable way to deploy real-time connectivity. “When I came to the city, the police needed to have a wireless connection back to the office, but we wanted to use something other than a traditional VPN connection, which does not work well in a wireless environment,” Yazdanpanahi says. The city reached out to wireless provider AT&T, and the carrier recommended NetMotion Wireless.

Mobile VPN To The Rescue
The NetMotion Mobility XE mobile VPN allowed the city to secure and encrypt data transmissions from the field and ensure that police and other safety forces could continue working on their laptops even if the wireless session was dropped. Police cruisers are equipped with Coban Technologies laptops that are tied in to the video equipment running in the vehicle. The laptops are loaded with the Sungard public safety software, which officers use to generate incident reports and access offender information. Officers also have Internet and email access.

"They have all of the tools they need in the car, and NetMotion gives us the ability to securely communicate to the back office," Yazdanpanahi says. "What NetMotion does is create a tunnel through the Internet that is encrypted, so we know our data is secure."

In addition to the police cruisers, the fire department, city marshals, and public works department also utilize the NetMotion solution. The approximately 140 mobile clients in the field can securely transmit reports and other data, as well as stream video from the vehicle camera system back to the main office. Officers can continue to work within their mobile applications even if the wireless connection drops.

With traditional VPNs, the loss of a wireless session could potentially cause data loss or corruption and force users to log in again and restart their applications. The mobile VPN avoids these problems through session persistence. Mobility XE suspends transmissions when a connection is lost; once the connection is reestablished, the system resumes transmitting, all of which is invisible to the end user. Officers save time because they don't have to log in to their applications multiple times, and productivity has been further increased because NetMotion boosts connection speeds by streamlining the security infrastructure.

"If we were using a regular VPN and a firewall solution, this would be much more complicated," Yazdanpanahi says. "The software makes it seamless, so I don't have to have an expert on firewall rules to set up the mobile units in the vehicles."

Make The Most Of Your Cellular Connections
The city recently deployed NetMotion Locality, which allows Yazdanpanahi to track the location of each wireless network card. Locality is a cellular network performance management software that can identify and pinpoint causes of connectivity problems, maintain a current and accurate list of each cellular network adapter and who it's assigned to, and can identify, redeploy, or disconnect underutilized devices.

"Occasionally we have a SIM [subscriber identity module] card that gets switched, and the Locality solution allows us to see which vehicle has which card," he says. "It has added tremendous value to our operation, because for me to keep track of which cards are active or inactive would require a lot of manual work that I don't have time for. With Locality, if I know a card is not turned off when it should have been, I can identify where it is."

Get Smart About The Coverage You're Paying For
In Tyler, the solution provides reports on technology availability, network usage, and dropped connections. It also allows the city to identify geographic areas where cellular coverage is poor and provide seamless roaming between different wireless network providers. "For example, there is one area just outside of Tyler that we know has poor coverage from AT&T, but Verizon has great coverage," Yazdanpanahi says. "We were able to map out where we had a coverage gap and equip our satellite office with Verizon instead."