Choosing the right mobile computers and productivity software are key parts of any mobile deployment, but even top-of-the-line equipment can’t help you if you lose wireless coverage. This is especially true for public safety agencies that rely on real-time data access and communications. 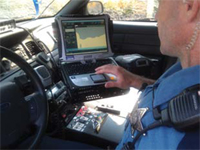 For the Oregon State Police (OSP), connectivity is critical for license plate and criminal history searches in the field. Unfortunately, the agency struggled with dropped connections that sometimes left officers in remote areas unable to access important databases. Thanks to a new network optimization tool, OSP has been able to quickly identify the cause of its wireless connectivity problems and has worked closely with its wireless carrier to shore up coverage gaps.

OSP has been using rugged laptops and wireless communication in its vehicles for years, and currently has 430 Panasonic Toughbook CF-19 mobile computers in its patrol vehicles, as well as in Fish & Wildlife Department vehicles. Officers use the computers for National Crime Information Center (NCIC) queries, mobile dispatch, and to write electronic citations.

Because officers operate across the state, covering some 95,000 square miles, they frequently enter areas with poor cellular coverage. “They would pull someone over and they couldn’t query the criminal records or even the driving history of the person,” says Albert Gauthier, CIO for the Oregon State Police. “You do those queries to make sure the vehicle is actually owned by the driver and that the photo matches the description of the person. It affected the functionality of the officer’s work and was a safety issue, too.”

Network Diagnostic Tool Provides Cellular Coverage Data
OSP had no way to determine the cause of the lost connections. “We needed some data on lost or dropped packets and dropped connections, as well as throughput and bandwidth,” Gauthier says. To troubleshoot and eliminate connection issues, they had to be able to determine if the connection problem was a firmware issue, a hardware issue, or if there was a legitimate coverage problem.

The agency’s wireless carrier, Verizon, was only able to provide coverage maps based on computer modeling, so even if the department reported a problem, the carrier did not always have enough data to remedy the issue. “We talked to Verizon about these problems, but they just didn’t have the information we needed to figure out what was happening,” Gauthier says.

OSP had been using the Mobility XE mobile virtual private network (VPN) solution from NetMotion Wireless for more than two years to provide secure access to its servers and applications. Verizon and NetMotion suggested that OSP consider deploying NetMotion’s Locality solution for network diagnostics and optimization. Gauthier and his team evaluated the system and determined that it could provide the type of diagnostic functionality the state was looking for.

NetMotion deployed the Locality agent on the Toughbooks early in 2012. The solution collects performance and location data, so the IT staff can see wireless conditions for each device. Locality then builds coverage maps; generates device, network, and application reports; tracks wireless card and modem usage; and flags any instances of poor network performance.

“This has given us a tool to almost surgically articulate what the problem is,” Gauthier says. “We can hone in on the problem much more quickly than before.”

Not long after the solution went live, the department was able to confirm that there were areas of low bandwidth near Bend, OR. Gauthier documented the issue and presented the coverage data to the carrier. Verizon confirmed the problem and plans to build three new tower sites across the region to help fill those coverage gaps.

“We never had the empirical data to report to them,” Gauthier says. “I showed the Verizon rep our map, based on the Locality data, and they were able to respond in a way that’s going to help us and all their other customers in that region.”

Instant Access To Where Your Connectivity Issues Lie
Now, OSP can quickly determine if a service issue was caused by the application, the network, or the laptop. “Some connectivity problems may be solved with a firmware patch,” Gauthier says. “If we didn’t have Locality, we would have to keep detailed records of every version of firmware in those devices. Now we can look that up dynamically. We can audit each system and access that information remotely.”

According to Gauthier, the system has reduced demand for IT support and increased the reliability of field employee connections. The department has greater visibility into cellular networks and field user experience. Gauthier says he also can track deployed mobile devices, their assigned users, and the firmware installed on those devices.

The IT department also has been able to prioritize applications based on the available bandwidth by using data from Locality combined with the Mobility application. “If we have a constrained bandwidth environment, we can set the NCIC queries or mobile dispatch software as the number one priority and eliminate the rest of the communications off the network,” Gauthier says. “It gives us more flexibility and control over the available bandwidth.”

Connectivity will be increasingly important as OSP adds more mobile applications, including a mobile fingerprinting system and mobile field reporting application (which will go live in January). There are also plans to share the Locality data with other local law enforcement agencies. “Not a lot of our partners within the county and municipality agencies have Locality, so the OSP is really the best agency to provide that data because we operate all over the state,” Gauthier says. “We can collect data from areas we patrol and give that to them so they can make better decisions, too.”