For public safety operations, seconds matter. So any improvement in response times can help save lives and property. The Fire-Rescue Department in Mobile, AL, has deployed a mobile computing solution that could potentially shave as much as a minute or more from response times by providing personnel with important data and mapping information. 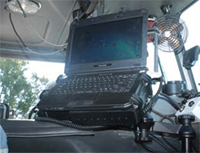 The department has approximately 509 firefighters and firemedics serving a quarter-million people in a 210-square-mile jurisdiction. It operates 20 fire stations (including two airports) that are staffed 24/7 and has 18 engine companies, 5 ladder trucks, 9 rescue/ambulances, a haz-mat response unit, and a technical rescue response unit. What they didn’t have was the type of in-vehicle technology that assistant fire chief Billy Pappas knew could help improve performance and response times. “We had seen mobile computing systems at other departments, and you can immediately recognize the utility of it,” Pappas says. “We tried for years to get the funding to deploy this, and the city eventually did use the technology in the police department. But this has been a priority for us for a long time.”

By placing a mobile computer in the cab of a fire truck or rescue vehicle, personnel would have access to detailed call information, instructions, and real-time mapping and directions, an important consideration for a department with such a large jurisdiction. “If you are responding to an obscure side street in a neighborhood you’ve never been to, it can take a few minutes to figure out where you are going,” Pappas says. “With our old system, dispatch could see where the trucks were at, but the driver couldn’t see where he was in relation to the call. That’s been a perennial problem.”

Set Clear Mobile Initiative Goals
The department was finally able to move forward with in-vehicle computers thanks to a Homeland Security grant. According to Pappas, the organization had several key goals.

First, the dispatch information had to be displayed on the mobile unit. Having that information in the vehicle can help personnel responding to a call at the local chemical plant, for example, to obtain vital information about the facility. In the past, any additional information was relayed verbally by the dispatcher, and the crews sometimes either didn’t hear all of it or couldn’t remember it. All tactical plans for the local chemical and oil processing plants (which were previously maintained in paper notebooks) could also be maintained in the mobile computers so that personnel could easily and quickly access that data.

The second goal was to have a map-based solution to help drivers determine exactly where they were going. “It was incredibly frustrating not to have that functionality, when we knew what the potential was,” Pappas says. “We looked at other agencies and found that in some cases they could shave off 1.7 minutes or more from their response times by having in-vehicle mapping. We have a very large response area, and having that in the vehicle was very important.”

Mapping could even help with locating fire hydrants. “As an officer, you can see where the other trucks are and then determine you’re going to catch a plug at a particular location because truck 14 is already at the other available hydrant,” Pappas says. “That’s much more efficient than wrestling with a map book or having the dispatcher call that information out to you.”

The solution also needed to have a status button so drivers could easily let dispatch know when the truck was en route. “Our documentation depended on when the dispatcher keyed the engine in as en route,” Pappas says. “Our response time data was dependent on manually entering that information. With the mobile units, the computer knows that immediately.”

Three captains within the department spearheaded the project, investigating the existing software and hardware options. They selected I/Mobile software from Intergraph running on Durabook D14RM rugged notebooks from GammaTech. According to Pappas, the department field-tested a number of laptops in the fire trucks to see which held up best, and the Durabook outlasted the other test models. It also fit the department’s budget. The notebooks include a 14-inch sunlight-readable HD display and are MIL-STD-810G-rated for drop, shock, and spill resistance.

The department began rolling out the hardware in July of 2012, and the software integration is still ongoing. The 40 computers are deployed in ambulances, fire engines, and ladder trucks.

When an emergency call comes in, the call is dispatched to a specific station via the existing station alerting system. That system automatically activates alarms, lights, and the bay doors at the station, as well as sending dispatch information to a printer located near the trucks. Simultaneously, the dispatch information is sent to the computers in the trucks via the I/Mobile solution. “That way, when they run out the door and jump in the truck, they have everything they need right in front of them,” Pappas says.

Rugged Notebooks Improve Response Times
The department is currently wrapping up its Intergraph I/Mobile integration, and Pappas says he expects that process to be completed soon. Personnel are already improving response times up to 30 seconds, and Pappas expects to see noticeable differences in response performance from the data and map availability, potentially shaving as much as 1 to 2 minutes from the response times once the solution is fully implemented.

“To me this is revolutionary,” Pappas says. “This is a shift that is going to be almost hard to fathom in terms of how good it can be for the department.”