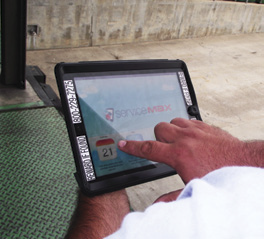 The face of field-service automation technology is rapidly changing, and the solution recently deployed at McKinley Equipment is a good example. The company has streamlined its work-order management operations using a cloud-based software solution integrated with a new CRM system and extended the software to its technicians via Apple iPads.

McKinley operates two companies: McKinley Elevator sells, installs, and repairs home elevators, wheelchair lifts, and stair chairs, while McKinley Equipment sells, installs, and repairs loading dock, warehouse, and commercial doors. Prior to going live with its solution in March 2012, the company “chased a lot of paper,” according to CFO Kevin Rusin. “We had paper work tickets, and we weren’t tracking a lot of customer information.”

When service calls came in, the company would generate a work ticket and then send a paper invoice based on the information the technician filled out on the ticket. There was no asset or expense tracking, except in the case of a few large customers that required it. Even then, the information was manually entered into a spreadsheet. With 45 technicians and installers handling up to four jobs per day, the company processed a significant amount of paperwork, which delayed invoicing. “We couldn’t grow,” Rusin adds. “It was a bandwidth issue. You have to hire so many different admin people to grow the business, because we were processing so much paperwork, and we had to manually keep track of contracts and special pricing.”

When McKinley decided to simultaneously deploy a CRM solution and a field service automation system, Rusin says management knew the two systems would need to be closely integrated to allow for the type of data collection the service and sales teams would require. On the CRM side, the company deployed Salesforce.com, which, in turn, recommended ServiceMax, a service management solution that is built on the Force.com platform and tightly integrated with the hosted software.

According to Rusin, the company chose Salesforce. com because of the ease of integration with its Sage ERP system, as well as tight integration between ServiceMax and the CRM solution. Using a cloud solution also was less expensive, but “at the end of the day, cost wasn’t the deciding factor,” Rusin says. “We have the ability to add or change fields and workflows in the system internally and not have to go back to a consultant to get that work done, and once I have my customer data in Salesforce.com, I have it in real time in ServiceMax.”

The company wanted to put mobile devices in the hands of technicians as well and made the decision to deploy the Apple iPad3 based on the unit’s relatively low cost and the built-in signature capture functionality. “We could have gone with rugged laptops or other devices, but to get signature capture we had to have a plug-in USB device, which would get broken in the field,” Rusin says. “The iPad is less than $1,000, so even if we have to replace one, the costs are lower.”

A New Alternative To BYOD — Take Your Device Home?

Still, having a nonrugged device in the field posed some risks. McKinley took an interesting approach to providing an incentive for technicians to handle the tablets with care. “We handed it to them, and although we own the devices, we said, ‘This is your iPad. You take it home.’ They can Skype with their families on it, surf the Internet at home, download Angry Birds, or whatever else they want when they’re not at work. For some of these guys, it was the first time they had Internet access at home. We’ve found they take a lot better care of it, because they’ve taken some ownership.” Salesforce.com went live in December 2011, and ServiceMax was rolled out the following March.

When a customer calls with a service issue, that information is entered into ServiceMax to create a work order. The order is then dispatched to a technician and sent to their iPad. The technicians access the ServiceMax application wirelessly through the device and can update all the work order information in real time. “In the past, the technicians would get paperwork at night via fax or email,” Rusin says. “Now they are instantly notified of a new work order and have the option of accepting or declining the work based on their schedules.”

Once they start their workday, technicians update work order status on the iPad (traveling, arrived, completed, etc.) and can write up all of the work they performed within ServiceMax. Once the information is entered, the customer can review it on the iPad and sign the work order directly on the screen. “Everything is tied back to the serial number on the equipment,” Rusin says. “We have a complete history and tracking on that serial number internally and for the customer. In some warehouses, we may have equipment at 400 dock positions, with six or seven pieces of equipment per location. We can tie all the work history to each asset.”

In addition to eliminating paperwork in the field, parts orders also have been expedited. In the past, parts orders were submitted on paper and manually processed. “Now if a technician is in front of a customer and has to order parts, the work order goes to the parts department queue, and everything is ordered at that time,” Rusin says. “We’re ahead of the curve by 24 hours on parts orders now.”

Instead of bulky paper repair manuals, all product information is now housed on the mobile device. “That makes it easier to get the actual part numbers into the work order,” Rusin says. Techs can also make Skype calls to field managers or the factory to solve any problems they encounter.

The system has only been live for one quarter, so the company has not been able to fully quantify the efficiency benefits yet. “We’re looking at first-call fix rates, as well as the speed at which we order parts, for benchmarking purposes,” Rusin says.

Rusin says he expects to find that technicians are able to do more work on the first call than before because they no longer have to dig through paper manuals or leave the customer site to order parts and talk to their managers. Because the information is flowing into the CRM system in real time, the company can invoice customers faster and generate cash more quickly. Also, because McKinley can generate a complete maintenance history for each piece of equipment, the company can also provide asset management services to its customers, too.

The next step in the deployment will be fully integrating the CRM and service solutions with the ERP (enterprise resource planning) system. Right now, some data has to be rekeyed from Salesforce.com into the ERP solution. Rusin says the company also plans to leverage the new types of reports that can be generated from the CRM/service solution. “Our large customers have to put together capital budgets,” Rusin says. “We now have the ability to run reports on what we’ve done for them, and then the senior account manager can have a meeting with the customer and give them our recommendations on those capital purchases, relative to our equipment.”