Growth is usually good for business, but for small companies, growth can sometimes present a resource challenge. Santa Cruz Pasta Factory discovered this when demand began outstripping the capabilities of its delivery fleet. The company deployed a rugged mobile computing solution to improve efficiency and expand its customer base without adding staff. 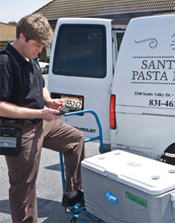 The family-run manufacturer of fresh pasta and sauces delivers its products direct to a number of grocery stores using a handful of delivery drivers. As the number of stores selling the company’s products increased, however, owner Steve Simonovich discovered inherent inefficiencies in Santa Cruz’s manual delivery and invoicing processes. “When we started growing, it became clear we couldn’t survive on handwritten invoices,” says Simonovich. “It took the drivers way too long to fill out the invoices, and it took our bookkeeper hours every week to input the invoices into QuickBooks.”

Simonovich was unable to add new stores to his existing routes, but didn't want to take on the expense of buying a new van and hiring an additional driver just to bring in new customers. Worse, the delivery drivers (Simonovich himself is frequently one of them) would often make invoice errors in the field that resulted in costly write-offs. "It's hard to be perfect at five in the morning when you're trying to add up the different pricing at different stores, and it's dark and you're barely awake," Simonovich says. Those write-offs added up to anywhere from $250 to $500 per month, a significant cost in a low-margin industry.

Simonovich noticed that other vendors delivering goods to his grocery customers did not have these problems because they were using mobile computers and bar code scanners during the delivery process. "I knew we had to change the way we did business," Simonovich says. "When I would see other drivers out at the stores, I'd ask them what devices they were using. The one name that kept coming up was Intermec."

Initially, Simonovich wasn't sure his application would be a fit with MSA. "I was really looking for a small solution for three handhelds," he says. "MSA was used to dealing with larger companies on a larger scale. I had to talk them into doing this. But I told them that there are a lot of people like me out there who are in the same boat, who need this kind of solution."

Simonovich and MSA worked together to develop a DSD system (based on MSA's QuickStock application) that met the company's basic invoicing needs, but that could be expanded later to accommodate more functionality. "Their solutions revolve around inventory management, and although that could be helpful to me, it was more than I wanted to tackle at the beginning," Simonovich says. "What I needed was a bar code scanner and the ability to input individual pricing for stores, print out invoices, and download all of that data into QuickBooks. There were a lot of details about credits and returns we needed to include, and I wanted a platform that could expand as we grew."

Mobility Allows More Stops Per Driver
Delivery drivers make weekly stops at each grocery store to take inventory, rotate stock, and invoice customers. Each store stocks a different mix of Santa Cruz's 26 products, and each customer has its own pricing schedule. Creating invoices at each stop took drivers about 20 minutes on average, depending on the customer.

Now, drivers are equipped with Intermec CN50 rugged PDAs and PB51 4-inch mobile receipt printers. When they arrive at a store, the drivers check the shelf for all expired product, scan the UPC code on the items, and generate credits within the system. After scanning the remaining items on the shelf, the drivers check the par level (level of each item of your inventory that you need on hand to make it to your next delivery) for each store to see if more goods need to be stocked. They go back to the truck, pull the inventory, and restock the shelves, scanning the items as they go.

Once everything is stocked, the driver can print out an invoice (adjusted for whatever credits the store is due) and provide that to the shipping and receiving department at the store. "Once they get back to our facility, they take the handheld and dock it, and it syncs with the computer," Simonovich says. "Everything is loaded right into QuickBooks."

Before, drivers manually wrote down all of the inventory changes and then added up the credits for expired product. "Every store might have 15 to 18 different products, so the driver would have to come up with a total for the credits and then do the same thing for the billing on the fresh product," Simonovich says. "We went from that process taking 20 minutes or more to creating invoices in about 5 minutes with the new system."

In addition, the old carbon paper invoices cost 18 cents per sheet; now, the company spends fractions of a penny to print each invoice. Invoicing errors have been eliminated, saving Santa Cruz hundreds of dollars in write-offs each month. "I can't emphasize enough how eliminating those math errors has helped us," Simonovich says. "If there was an error of $7, I wasn't going to go through the hassle of contacting the bookkeeper of a really busy store over that. I don't have that kind of time, and they don't have that kind of time, so we wrote it off. But we were writing off $50 or $100 a week like that, and it added up." Simonovich was also able to add another three to four stores per route without adding staff or new trucks.

Rugged Computing Vs. Consumer-Grade
Although the company briefly considered deploying smartphones for the application, Simonovich says rugged devices were a better choice because the computers get dropped frequently, and they have to survive the dusty environment of the pasta manufacturing facility. The application also proved easy to use, and training took only 30 minutes per driver.

Simonovich hopes to add more features to the solution in the future. For example, drivers currently have to check par levels for each store on a printed Excel spreadsheet. "When there are changes to the store levels, I have to go in and make them and then print it out again," Simonovich says. "I want to incorporate that into the handheld, so when we scan an item it will tell us what the par level is."

That will add even more time savings to the efficiencies the solution has already created. The company is billing for exactly what it delivers, and the bookkeeper has saved 6 to 8 hours of labor per week since she doesn't have to manually enter invoices into QuickBooks. "We also look more professional in front of our customers," Simonovich says. "And I've got the ability to expand the routes as the business grows."