Cutting Through The "Entertainment" At CTIA Wireless I.T.

CTIA Wireless IT and Entertainment, held September 12 to 14 in Los Angeles, brands itself as the biggest wireless data event in the industry. That might sound valuable to enterprises concerned with wireless data solutions, but in this case, size isn’t everything. You see, most of the size of the show this year came from the entertainment sector, rather than the IT (i.e. enterprise) sector. Walking the show floor, attendees were assaulted by vendors hawking ringtones, mobile dance floors, music trivia, and mobile sports content. The sounds and lights made it difficult to have any meaningful conversations on the show floor – but I still was able to meet with some of the key players in the enterprise space. Here are some of their announcements, and what they mean for you:

Sprint announced its plans to expand its EV-DO (evolution data only) Rev A 3G wireless device  portfolio, beginning with Pantech and Sierra Wireless mobile broadband cards. I spoke with Danny Bowman, VP of product marketing and planning for Sprint, and he says the most beneficial component of Rev A is its uplink speeds. “Downlink speeds of wireless 3G are already replicating wireline environments, so the improvements of Rev A will be incremental,” he said. “The uplink speeds, however, will increase to 400 to 500 kbps [kilobits per second], enabling more functionality in the field.”

Cingular had several announcements at the show, one of which was its new smartphone, the Nokia E6, which Cingular has exclusive rights to for the life of the device. With a price point of $149.99, Cingular expects this device to increase its penetration into the mobile e-mail market. I had a chance to view the device, and could see it would be a close competitor with the Motorloa Q smartphone. Kent Mathy, president of the business markets group in Cingular’s B2B organization, was enthusiastic about the battery life of the device. “It can last 14 days on standby, and 5½ straight hours of talking,” he said. “In real-life use, it can last two full days without charging.” For enterprises looking to launch a mobile solution but prevented from doing so because of costs or device concerns, the E6 is a viable option that overcomes those concerns.

Also making announcements at CTIA was Panasonic, which introduced three new business-rugged Toughbooks with embedded 3G wireless data radios: the CF-W5, the CF-T5, and the CF-Y5. These devices are all lightweight (e.g. less than five pounds) with a pared-down ruggedness of the traditional Toughbooks. The announcements are part of Panasonic’s initiative to expand its product offering across the wireless market, moving beyond the company’s traditional “ultrarugged” roots to the semirugged space. “We’re still going to defend our foundation in the industry markets that require rugged, such as utilities, field service organizations, and telcos,” said Vicky Obenshain, director of wireless strategy for Panasonic Computer Solutions Company when I spoke with her over breakfast at CTIA. “But we see a need for rugged, wireless devices across the enterprise.” Organizations such as insurance companies, healthcare entities, and IT service companies, not to mention traveling executives and salespeople, can benefit from Panasonic’s lighter product offering.

The show also included announcements from Palm, both regarding a new software developer program and a new Treo 750 smartphone for Vodafone customers (mostly in the United Kingdom). Additionally, AppForge announced Crossfire 6.5, a new version of its mobile application development tool, and @Road announced the availability of its flagship MRM (mobile resource management) product in the United Kingdom.

The show finished off, for me at least, with Qualcomm’s 3G A-List awards, a respected industry program honoring the top end user wireless deployments of the year. The awards were especially important to me this year, as two of winners have been featured in Integrated Solutions this year: Cox Communications in October, and Tennant Company in July. In fact, I was able to meet with Al Briggs of Cox Communications whom I interviewed for the story. He and I are pictured here with Cox' award: 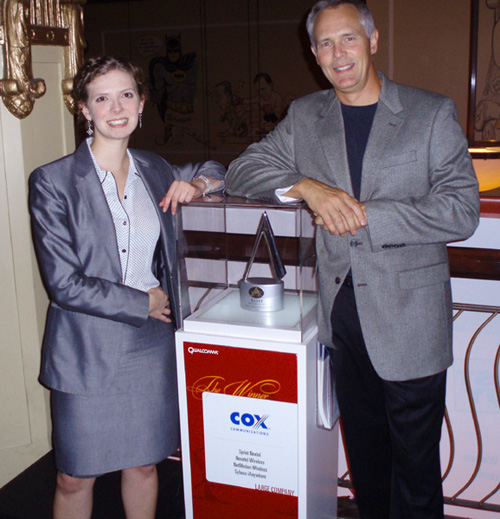 Though CTIA yielded beneficial meetings and announcements for me to pass on to readers, it was still to “entertainment-focused” for my liking—and several of the people I met with agreed with me. What was once a show featuring about 65% enterprise and 35% entertainment vendors has now become the opposite. Will the show split into two? I don’t know about that. But know that Integrated Solutions will always cut through the noise to bring you information that matters.