Customer Experience During Times Of Crisis 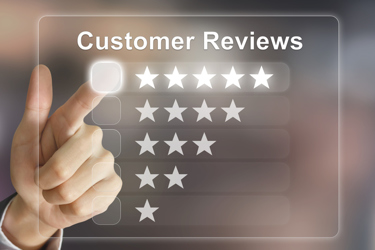 This is the first article in a two-part series from Jolt Consulting Group on how companies can survive and even thrive during the COVID-19 era by focusing on improving their customer experience. Click here for part two.

Catastrophic. Frightening. These and many more adjectives are being used daily to describe the current global pandemic sweeping the world and, in turn, sweeping our economy off a cliff. Closure of bars, restaurants, sporting venues, theaters, etc. will all have a significant trickle-down effect on our economy as the supply chain providing goods and services to all those and many more establishments wipes revenue off the board. While there is little that business leaders can do about the economy and associated pandemic at large (other than follow governmental guidelines), there are many things that leaders can do to protect their companies, their employees, and themselves.

An examination of some of the most recent recessions – the 2008 financial collapse; the 2001 shock initiated by 9-11; all have lessons in them if we are willing to learn. Following the 2008 recession, Bain & Co studied 700 U.S. companies and found that twice as many made the leap from laggards to leaders in their sectors during the downturn, as during surrounding periods of economic calm. They concluded that an overwhelming majority of the companies that remained laggards shared one common reaction – drastic cost reductions. This, of course, is a natural reaction, as organizations 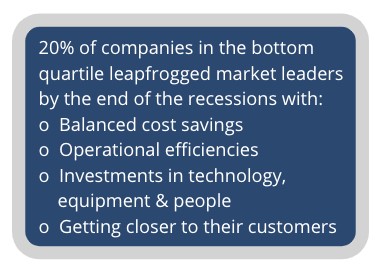 look to preserve cash and stifle investments to “wait out” the unknown. The leaders in their sectors, however, had a very different perspective. Once taking measures to address the near-term challenges (e.g., a massive switch to working from home in the current environment) and some cost-cutting, the leaders universally focused “beyond the storm” and invested in the people, processes, and technologies necessary to take advantage when calmer waters return.

Another study, conducted by The Harvard Business Review, found that in the past three global recessions, nearly a fifth of companies didn’t survive. However, 20 percent of companies that were in the bottom quartile were able to leapfrog market leaders by the end of the recession. The ones that broke away from the pack balanced cost savings and operational efficiencies with strong investments in assets (e.g. technology and equipment), their people (e.g. training), and most importantly, by getting far closer to their customers than the competition.

Many of us are currently using one of the best success stories to emerge from the most recent recession to pass the time while we shelter at home…Netflix. Netflix was ‘born’ during the last recession in 2008. Initially introduced as an alternative to video rental stores, Netflix leaned into its customers and understood that it provided a much-needed diversion from the constant drumbeat of negative news on the television at the time. (Sound familiar?)  Further, Netflix built a reputation for outstanding customer service, which in turn helped propel its brand recognition through word of mouth advertising. This strategy was not fleeting but remains a core tenant of its strategy today – namely, be “easy to do business with.”  As of today, Netflix continues to excel with over 61 million subscribers, a growth of 60 million from pre-recession days.

Conversely, let’s examine a different company that took a different approach. During the 2001 slowdown, Dell’s executives favored cost reduction tactics over enhancing customers’ experiences with phone agents. They outsourced their call center to a low cost, offshore model. That workforce struggled to understand the Dell product line, adopt the Dell culture, and were by and large not native-English speakers. The net result was customers found it very challenging to order from Dell, obtain product information, and request service, thus frustrating customers. By 2006, some five years later, the company still hadn’t made up its loss in market share resulting from unhappy customers. These lower revenue and profit results in turn forced the organization to maintain the ultimately damaging model, thus requiring it to transfer nearly 45 percent of all customer calls.

What do all these history lessons tell us? They all have a common thread – get closer to your customers while balancing near term finances. More specifically, those companies that balance near term cost savings with aggressive long-term investments in their customer experience ultimately are the most successful enterprises.

Part two of this series will focus on the specific actions company should take to excel in the COVDID-19 environment.

For more information, visit www.joltconsultinggroup.com for a whitepaper on this topic.

Jeff Oskin is the President of Jolt Consulting Group LLC. He is an expert understanding business visions and translating those visions into concrete action plans that organizations can execute. He has proven countless times throughout his 20+ year career an ability to be a savvy executive who understands the nuances of optimizing business operations, managing change, acquiring technology, and managing large-scale programs/projects.