With a new fleet management solution, Cox Communications has significantly reduced its carbon footprint and is saving $2 million per year. 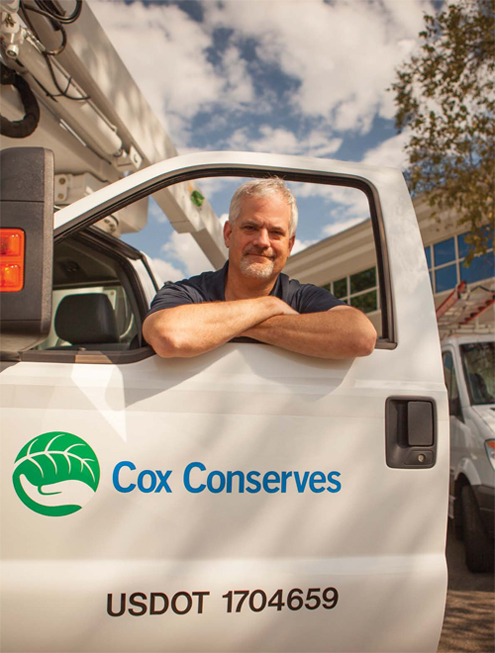 A certain lovable frog once said that it wasn’t easy being green. He apparently wasn’t aware of the significant cost savings made possible by “greening” a fleet and reducing fuel consumption. At cable/broadband giant Cox Communications, an environmental initiative aimed at reducing carbon emissions has led to potential fuel savings in the millions thanks to a GPS-based fleet management solution. The program, Cox Conserves, was created and is led by their parent company, Cox Enterprises.

Atlanta-based Cox is the third largest cable and broadband provider in the U.S. In 2006, the company began rolling out a new GPS solution to help reduce idle time and fuel consumption.

Cox Communications operates a fleet of some 5,000 vehicles driven by its field technicians. Overall, Cox Enterprises’ fleet comprises nearly 13,000 vehicles. The company has launched a number of sustainability programs (including investing in more efficient heating/cooling systems and deploying hybrid fleet vehicles), but fuel consumption was an area that could potentially provide big returns.

“One of the primary drivers of the GPS program was the environmental issue,” says Mark Leuenberger, assistant vice president of supply chain and fleet at Cox Enterprises. “As part of our Cox Conserve initiative, we wanted to use less fuel and eliminate idle time. That’s not just a green initiative; it also saves us money.”

The company partnered with Atlanta-based Group Seven Consulting (G7) to help select a fleet management tool that would provide the location data and vehicle operation metrics the company needed to help reach its productivity and fuel savings goals, while simultaneously improving driver safety and operational visibility.

With G7’s help, Cox narrowed the field to three vendors and ultimately selected the Trimble GeoManager solution, which at that point was part of the @Road GPS suite (Trimble acquired @Road late in 2006). “At the time, there weren’t as many companies in the field, and very few that had experience with a fleet of this size,” says Barry White, managing partner at G7. The GeoManager solution also excelled at providing the location, safety, and operational metrics Cox needed. The solution was also Web-based, an important feature, according to Leuenberger.

Focus On Fuel Savings
Unlike a utility or a repair/maintenance company, the bulk of Cox’s truck rolls are prescheduled, so the GPS solution was not necessarily targeted at improving scheduling and dispatch. The company expected productivity improvements through better fleet visibility. Leuenberger says his team knew that tying efficiency increases to the GPS solution would be difficult, since so many other factors can affect those results.

To measure the success of the GPS deployment, Cox focused on two metrics to measure the return on investment: vehicle idle time and mileage reduction. “In a corporation like this, if you try to measure productivity there are always four or five other initiatives going on that can affect that measurement,” Leuenberger says. “But if you measure something like idle time, it’s very straightforward, and it is directly affected by the new tool. If we could justify using the tool based on those simple metrics, then any other benefits are gravy; that goes right to the bottom line.”

Reducing Idle Time Saves Millions
For its initial pilot, Cox deployed the GeoManager solution in two markets: Orange County, California, and Oklahoma. The pilot program lasted one year, and in that time the company was able to document substantial idle time reduction and fuel savings.

The solution allowed Cox to set up “idle triggers” for 5, 10, and 15-minute increments. In the pilot, the triggers would alert a control group of drivers to shut down their vehicles. A baseline group in the same location continued to operate without the idle triggers. Those tests showed an average engine idle time of 11 minutes per truck, per day for vehicles with a triggering alert. The baseline group showed an average idle time of 96 minutes per day. That amount of reduction in idle time could provide significant fuel and cost savings.

Because of changes in the way Cox structured its operations, along with some budget constraints, the system was slowly deployed over the next four years. Roll out was further complicated by the fact that there are really two distinct fleets within Cox: Network bucket trucks, which are the larger vehicles that service the infrastructure (essentially, anything outside of a customer’s home), and field service vehicles used by technicians that have been deployed to a customer’s home for installation, repair, and other services. The field service vehicles respond primarily to pre-scheduled service calls; the network trucks are focused on construction and outages, along with scheduled maintenance. “They have very different duties and tasks,” Leuenberger says. “Each one wants different things out of the tool and wants it to behave in a different way.”

During the deployment, change management was a key focus. Under the new solution, managers at each location would have to evaluate data on fleet performance and use that information to coach drivers to improve operations in the field. “The messaging to employees was very important,” Leuenberger says. “We worked closely with human resources and the market supervisors at all levels.”

Cox established strict guidelines about how the tool could be used and didn’t change any existing operational rules around driver behavior. The company simply increased enforcement. “The majority of technicians will agree it helps them do their job better,” Leuenberger says. “They can get more work done, it saves fuel, and it keeps them safe.”

Managers receive weekly reports about idle time, speeding, mileage, and fuel consumption, and are able to address any issues during the weekly team meetings. “We have standards on speeding and idle time, but we’ve focused on showing the managers how to coach during their training,” Leuenberger says. “You give them comparative data between marks and regions, so they understand where they are. There’s a large data set that everyone can use to compare their performance.”

Since the majority of activity in the Cox fleet is prescheduled, dispatchers aren’t using the location data to route drivers. During an outage, however, dispatchers do use the location information to locate technicians and assign them to different tasks.

With the 5,000-vehicles enabled with the GPS solution, Cox expects to save more than 1 million gallons of fuel and approximately $2 million each year, while reducing its carbon footprint by more than 25 million pounds of CO2 (roughly 30 pounds per vehicle, per day).

That doesn’t necessarily tell the entire story, however. The company was able to further improve fuel efficiency by correcting other driver behaviors. “We saw an uptick of 20% in miles per gallon in some regions, and that was directly related to speeding,” Leuenberger says. “Once we had the data available, we saw speeding incidents drop by 60% in some areas.”

The Trimble solution also provides location and historical location data, which Cox can use to improve route optimization. It has also improved driver safety, since dispatchers can check on technicians in remote areas that may have gone silent. The company can also remotely diagnose vehicle issues, so that if a “check engine” light comes on, staff can direct the technician to either return the truck or continue working. If a technician needs assistance at a customer location, dispatch can also locate the nearest available technicians that can respond to the call. That helps ensure job completion and can reduce or eliminate additional truck rolls to the same location.

Leuenberger hopes the company can eventually integrate data from the GeoManager system with its ETAdirect workforce management solution from TOA Technologies. “We had that in mind from the beginning, and a link does exist, but the business case still must be developed,” he says.

Cox Communications has shown that, while location data can positively affect productivity and efficiency, there are real dollars to be saved through better monitoring of vehicle use — including speeding, idle times, fuel consumption, and overall mileage. By focusing on key metrics that could be directly measured and improved via the fleet management system, the company was able to build a return on investment model that clearly spelled out the economic impact, as well as the environmental impact. By doing so, the company also showed that reducing your carbon footprint doesn’t mean you have to reduce profits.

Why Real-Time Metrics Are Imperative

For Cox Communications to meet its fuel reduction and environmental improvement goals, the company needed to be able to clearly measure how its vehicles were performing. It sought a solution to monitor idle times, speeding, and fuel consumption, and wanted to be able to act on that data to improve driver performance. One of the reasons the company ultimately selected the Trimble GeoManager solution was that it offered the ability to monitor those metrics in real time.

“From a reporting standpoint, we can look at specific metrics and see how we are performing against our goals,” says Mark Leuenberger, assistant VP of supply chain & fleet at Cox Enterprises. “We can set targets for our managers, and they can measure in real time how close they are to achieving those goals.”

For instance, the Trimble GeoManager system can provide exception alerting related to speeding, idle time, stop count and duration, battery performance, distance driven, and off-hours use. Because the GeoManager iLM module is tied into the engine bus, Cox can easily track how long each vehicle idled during each shift, or if drivers exceeded the speed limit.