Mobilizing service management cuts invoicing from 5 to 15 days down to 1½, while saving 5 hours of daily data entry.

Richmond Refrigeration Service is a mechanical contractor servicing supermarkets, convenience stores, and other clients in five states. For years, the company managed its field service operation manually, but the system delayed invoicing, resulted in more service callbacks, and added overhead, in addition to reducing the effectiveness of the company’s dispatch operation. It would often take several days for technicians to process paperwork and generate invoices, which slowed the receipt of payments. 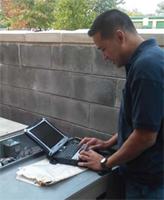 Management knew the company needed to automate its field workforce. “We wanted to improve communication and eliminate paperwork,” says John Lollar, president of Richmond Refrigeration. “Sometimes we would have to wait for the technicians to turn in their paperwork before we knew if the call was completed or if we needed parts. It made billing take longer, and sometimes the paperwork got lost. We knew paper had to go away, and we needed something that would give us instantaneous communication.”

The company had been working with service management solutions provider WennSoft (the work order management system integrates with Microsoft Great Plains/Dynamics ERP system), but the solution was limited to back office operations. When the company decided to deploy a mobile solution, it turned to WennSoft’s MobileTEC offering.

A Mix Of Mobile Devices
The company launched a pilot with one technician, but preparing for the full launch took time. “When we first started looking at this, the solution wasn’t fully developed,” Lollar says. “We spent a year doing trials, and we gave WennSoft feedback. Once it was ready, we rolled it out in 20 days. We’d bring a technician in for a day to train, and then he’d be out in the field using the system.”

Thirty of the company’s technicians are now using MobileTEC. While most technicians use the rugged notebooks, Lollar says the company is transitioning to less expensive HP tablet devices and, eventually, iPads. “We have some guys who are less likely to destroy the computers, so it was cheaper to go with the HP tablets,” he says. “They train on the Toughbooks, and as they mature we can shift them to a tablet. In fact, we’re thinking of transitioning to iPads once WennSoft starts supporting them.”

Most technicians embraced the solution after seeing how it would improve their day-to-day work in the field. “We have a few technicians who still don’t use the mobile solution, and we aren’t forcing it, but the ones who are using it love it now and wouldn’t give it up,” Lollar says.

Mobile Provides Big Boost To Cash Flow, Inventory Replenishment
When the company receives calls, they are entered into the WennSoft solution and dispatched to the technicians via their mobile computers. They enter the job information, note inventory used, report labor, and get a signature on the mobile computer. The company receives the information in real time. “You can bill the next day as long as the call is complete,” Lollar says. “It eliminates having to enter the data here. We just check the information.”

Where it previously took 5 to 15 business days to process an invoice, the company can now typically process them in a day and a half. This has also reduced the amount of credit the company has to carry, since it receives customer payments faster. “In some cases, we can even get it down to 24 hours,” Lollar says. “That’s huge for cash flow.”

Inventory management has improved. Since techs enter the parts they use as they complete their jobs, the company reviews all inventory changes daily. Replenishment times have gone from up to eight days to just a day and a half, according to Lollar. Technicians can easily request parts from other trucks and order and pick up needed parts at nearby supply houses.

“If a technician needs a part, we either order it or pull it from shelf stock,” Lollar says. “The system has eliminated a lot of the data entry double work we used to do.”

With access to parts and customer service history on mobile devices, technicians are more effective. This has reduced callbacks, which saves the company money on its maintenance contracts.

Two administrators previously entered notes about work history and technician labor into Richmond’s back end systems, a process that took nearly 5 hours daily. Now that data is uploaded from the field, which allows the company to reassign employees to other tasks. Realtime processing also has ended the glut of weekend paperwork that arrived each Monday.

“The technicians don’t have to write all of these notes down,” Lollar says. “They don’t lose the paperwork. They can get a history of past calls, so they can see what other technicians have done at that location. That’s huge on a weekend. Under the paper system, we didn’t have call numbers on the weekend, so Monday it was havoc; we had to create all these service calls in the system. Now the technicians do it themselves in the field. They can create a call ID, and everything is already in the system.”

Lollar says implementing the mobile solution has paid for itself. “It’s reduced overhead, increased our cash flow, and simplified communication,” Lollar says. “We can react to things faster, and we’ve improved our customer relationships because we know what is going on in the field, fast.”