Tablets Are Tough Enough For The Job

As members of a consulting firm for the engineering, architecture, construction, and environmental markets, the staff at Burns & McDonnell knows the value of having the right tools for the job — including the right mobile computing tools. The company has boosted the efficiency and accuracy of the data collected by its field staff using rugged tablet computers and specialized mobile data collection applications.

Burns & McDonnell has more than 3,000 employees globally. The company’s Business and Technology Services (BTS) Division is made up of consulting professionals, including staff that provides IT and geographic information system (GIS) solutions for external clients and to support projects for other business units. “We may do a sidewalk inventory or have a specific job where we collect data and send it into a maintenance management system that we are implementing, or we may just perform part of a project for another division within the company,” says Bryan Claxton, project manager at Burns & McDonnell. 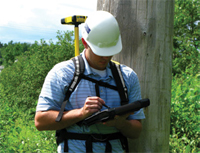 When the BTS Division was formed almost a decade ago, employees used a combination of paper, personal digital assistants, digital cameras, and GPS devices for data collection and analysis activities. The company used Esri’s ArcPad solutions as well as the Trimble GPS software TerraSync for the collection of location data. “Over time, we moved to Esri’s ArcGIS for Mobile solution, which provided us with a framework allowing us to create a robust set of forms with logic so that we could collect better data in the field,” Claxton says.

Tablets: Lighter Than A Laptop, Larger Screen Than A Handheld
The company also sought new, rugged computers with larger screens to complete the solution it needed to improve data collection performance in the field. While the company uses a variety of mobile devices (including IBM laptops and iPads), the rugged laptops it had used previously in the field were too heavy for many applications, while smaller devices didn’t provide enough screen real estate for the mobile applications.

While deploying a solution for a power company in Florida, the BTS team began working with Motion Computing’s F5v and F5 rugged tablet PCs. “The F5 units are rugged tablets with good battery life, they have an integrated camera, and we can easily use the devices to sync our field data with our enterprise systems back in the office,” Claxton says. The company has deployed nearly 200 Motion F5 and F5v tablets, and Claxton says the computers and GIS-based data collection applications have made auditors more productive, reduced data errors, and eliminated manual data entry of handwritten notes.

Tablets Provide Faster Access To More Accurate Data
The company uses the Motion rugged tablets for a wide variety of tasks, from ensuring on-site compliance during construction projects to conducting audits of existing facilities. Burns & McDonnell staff can fill out customdesigned data collection forms on the device, capturing valuable details (including, for instance, deficiency description, proposed repair, priority, and estimated cost of repair). The F5’s integrated digital camera allows employees to capture and attach photographic documentation directly to their observations. At the end of the day, team members can upload their data from the tablet PCs to an enterprise SQL Server database, and the information is immediately available for use within other applications.

Claxton first deployed the Motion tablets for a sidewalk inventory project in Lee’s Summit, MO. “The devices we were using in-house were not rugged enough, and I was concerned about sending people out into the field with something that wouldn’t survive multiple drops,” Claxton says. “There were some other rugged devices we had available, but we didn’t want staff to have to carry eight-pound computers when they were walking 300 miles of sidewalk.”

The Burns & McDonnell team walked hundreds of miles of sidewalk, logging conditions and noting the locations of defects. They were also able to photograph each defect and tie that information to GPS locations. The system allowed the company to document 14,500 defects within approximately 3’ accuracy. That data was fed into a GIS database, so the client could immediately access information about sidewalk conditions in order to allocate funds for repairs.

Benefits vary based on each project, but the key improvement has been the speed with which information can be utilized. Because the data gathered in the field can be fed directly back into Burns & McDonnell’s SQL server back end databases, tasks have gone from taking weeks to just seconds using the mobile solution. In the past, handwritten notes had to be entered into the company’s computer systems after being sent in from the field.

In a recent facility audit project for a large foods client, for example, the company was able to track more than 800 deficiencies and issues and report back to the client within five days, which was three to four weeks faster than previously possible. Mobility has cut two-thirds of the time required to execute auditing processes.

On another project, the company is using 115 of the Motion F5v devices running Esri ArcGIS for Mobile software so that field workers can collect and monitor key environmental issues during construction of a power transmission line in California. The mobility solution replaces a paper-solution system that relied on map books and manual data entry.

Data security has also improved. “If you drop a tablet on the third day and it does happen to break, you can pull down that synchronized data. The information is not just sitting locally on the machine. We have it securely posted back to the enterprise systems in near real time, so you don’t lose weeks of data if there’s a problem.”

Burns & McDonnell finds new ways to use the mobile solution almost weekly. The company is beginning to allow its clients to use the tablets as well, so that they can track the progress of specific projects. On some projects the company is providing read-only tablets to regulators so that they, too, can monitor project status.

“We get calls from somebody that’s sending someone out into the field,” Claxton says. “There are always new opportunities to use the mobile devices, because it’s a better way to collect that information so that you can use it moving forward.”